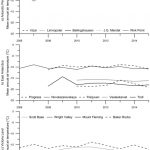 Share this…FacebookTwitterWhere’s The Anthropogenic Signal? Since 2000s, An Arctic Warming & Sea Ice Pause … Cooling In Antarctica … Undermine AGW Claims It was 3 years ago when scientists first began documenting the pause in Arctic sea ice decline that began in 2007. While detailing the potential for “cherry-picking” such a short span of years […]