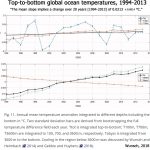 Share this…FacebookTwitterA new analysis of top-to-bottom (0-5000 m) ocean heat content changes since the mid-1990s reveals that (a) large regions of the global ocean have undergone cooling, and (b) the overall net temperature change for 1994-2013 was a modest 0.02°C.  In contrast, during the Holocene the oceans naturally warmed at a rate and magnitude several […]