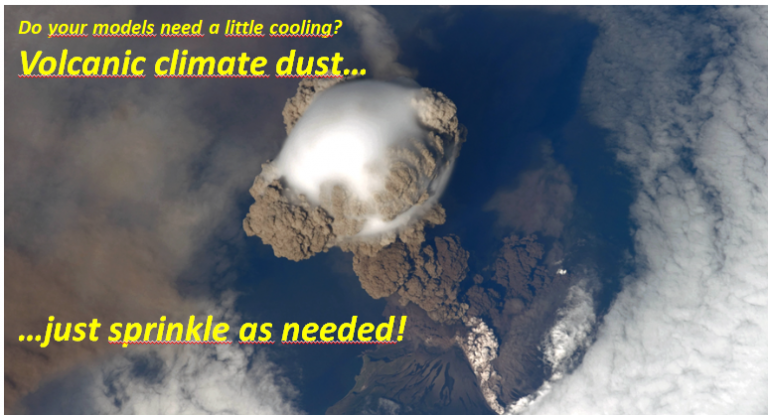 Climate models struggle with this because CO2 is climbing steadily. So why does climate warming stall under these conditions? Folland and his colleagues examined the models and are convinced that despite the small problems, the models function perfectly well and thus no other climate factors need to be accounted for.

In 1940s it was a bit too warm and the models were unable to reproduce this. Given, the authors say. Greenhouse gases have been responsible for almost all the warming of the last 125 years. Here’s the abstract:

Causes of irregularities in trends of global mean surface temperature since the late 19th century
The time series of monthly global mean surface temperature (GST) since 1891 is successfully reconstructed from known natural and anthropogenic forcing factors, including internal climate variability, using a multiple regression technique. Comparisons are made with the performance of 40 CMIP5 models in predicting GST. The relative contributions of the various forcing factors to GST changes vary in time, but most of the warming since 1891 is found to be attributable to the net influence of increasing greenhouse gases and anthropogenic aerosols. Separate statistically independent analyses are also carried out for three periods of GST slowdown (1896–1910, 1941–1975, and 1998–2013 and subperiods); two periods of strong warming (1911–1940 and 1976–1997) are also analyzed. A reduction in total incident solar radiation forcing played a significant cooling role over 2001–2010. The only serious disagreements between the reconstructions and observations occur during the Second World War, especially in the period 1944–1945, when observed near-worldwide sea surface temperatures (SSTs) may be significantly warm-biased. In contrast, reconstructions of near-worldwide SSTs were rather warmer than those observed between about 1907 and 1910. However, the generally high reconstruction accuracy shows that known external and internal forcing factors explain all the main variations in GST between 1891 and 2015, allowing for our current understanding of their uncertainties. Accordingly, no important additional factors are needed to explain the two main warming and three main slowdown periods during this epoch.”

Now isn’t it a bit odd that the authors made absolutely no mention of the ocean cycles in the abstract? As our regular readers know, the ocean cycles run surprisingly synchronous with the fluctuations in global temperatures, i.e. the key factors here are the AMO and PDO.

At phys.org we find a short explanation of the paper. In it we find the culprits for the three hiatus/slowdown phases which Folland and his colleagues wish to believe they have found:

They then offer possible explanations for the three main observed slowdowns in GST increase. For the first slowdown, they found evidence of El Niño and La Niña weather patterns that likely reduced heating by producing more cloud cover. For the second slowdown, they found evidence of increased volcanism—smoke and ashes from volcanoes can block sunlight. The team asserts that the third slowdown, which is also the one on which many global warming skeptics rely, was likely caused by a combination of La Niña events and volcanism.”

The first slowdown was supposedly caused by the El Nino/La Nina. An ocean cycle, in any case, but it’s odd there’s no mention of the PDO.

The second slowdown (1941-1975) supposedly was caused by volcanoes. Haha – now that’s good for a loud laugh. Naturally it was due to the PDO, which went negative during the period:

And the third slowdown supposedly had something to do with a combination of El Nino volcanoes. Folland and his colleagues are  pulling tricks like real troopers.

In the abstract the authors mention the sun putting the brakes on the recent slow warming. But at phys.org there’s no mention of that. And if the sun can put the brakes on, then it can also accelerate. Yet in the models there is no room for that because supposedly almost all the warming of the last 120 years has been caused by greenhouse gases.

Under the bottom line the authors concede nothing to climate variability. Instead the volcano card gets played when all else fails. Whenever there’s need for some cooling, volcanic dust gets sprinkled in the computer climate world.