Germans Like Talking “Climate Protection”, Yet Very Few Willing To Walk It

Today I have an anecdote or two about climate protection and the real willingness among Germans to do it.

Over the end of last week and last weekend I was out on a 4-day trek in the Bavarian Alps, one that took me (by foot) to the top of Germany’s highest peak, the Zugspitze (2962 m) before descending into Austria. 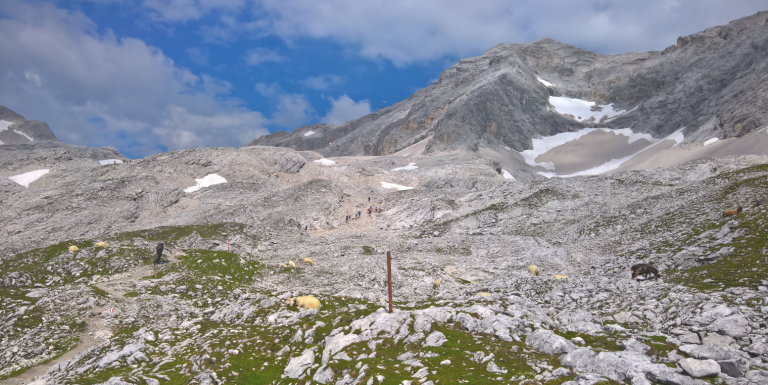 Glaciers have all but disappeared high in the Bavarian Alps. Image: P. Gosselin

Trains in Germany have become unreliable

I remember reading in a travel guide in the late 1980s: “The German Federal Railway is outstanding for its punctuality and general efficiency.” That was then. Today the Deutsche Bahn (DB) is a horror story. I now call it the Blunder-Bahn.

The view today among the public is that the German Federal Railway (DB) is too often unreliable, expensive and poorly operated. And for that reason getting the German public out of their cars and into train to make the country more climate friendly is going to be a tough sell.

Here’s the final tally of my DB round-trip: In total I counted 5 delayed trains, 2 missed connections, 2 re-bookings, 1 cancellation, 1 reported incident of fire at the Bremen main station, 1 report of people walking onto the tracks, and hours of total delay. What’s funny is that many people tell me that I was actually lucky and that often things are even much worse.

Avoid the train if you can

Yet, politicians like to insist that people use the DB more often for longer trips instead of using the car – it’s greener and good for the climate, the say. But unless the DB undergoes some sort of miraculous transformation, I say good luck in herding the public from their cars and into public transportation like the DB. Not going to happen.

Even green-minded politicians themselves continue to almost exclusively use cars and planes to get around nationally.

Disappearing glaciers in the Alps

For my 4-day trek in the Alps I joined a group of eight persons organized by a Bavarian tour company that provided us with an experienced guide and simple accommodations in mountain huts.

As we climbed high up in the Alps, it became obvious that the glaciers weren’t what they used to be, and so time and again I had to listen to comments about what climate change was doing to the glaciers in the Alps, and what it shame it was.

Of course the cause of the disappearing glaciers was CO2, and global warming. Four days long I had to hear it. But I kept quiet and just nodded acknowledgement. There was no point in bringing up natural factors and debating it there.

Very few willing to do something for climate protection

But here’s the thing: On the last evening at dinner I asked who actually paid the optional 15-euro “climate contribution” amount (for offsetting) upon booking the tour. Almost everyone said “no”. The company’s tour guide then disclosed that only one single person (from eight) had in fact paid it, meaning only 12.5% were actually willing to do something for the climate.

Although Germans all like talking about protecting the climate and saying they are very much in favor of it, very few are actually willing to do much about it.

Only 2 persons travelled by train

That unwillingness was confirmed by how the hikers travelled to Garmisch-Partenkirchen, near where the hiking began. It turned out only 2 persons travelled in by train (I was one of them), 5 came by automobile, and one person, who several times expressed a concern about climate change, actually flew into Munich from Bremen with a commercial airline (560 km air distance).

What can we gather from all this? Don’t expect the big green climate protection revolution to occur any time soon in Germany. Most like talking about it, but few are willing to walk the talk.

8 responses to “Germans Like Talking “Climate Protection”, Yet Very Few Willing To Walk It”