German ZDF public television recently broadcast a report showing how electric cars are a far cry from being what they are all cracked up to be by green activists. 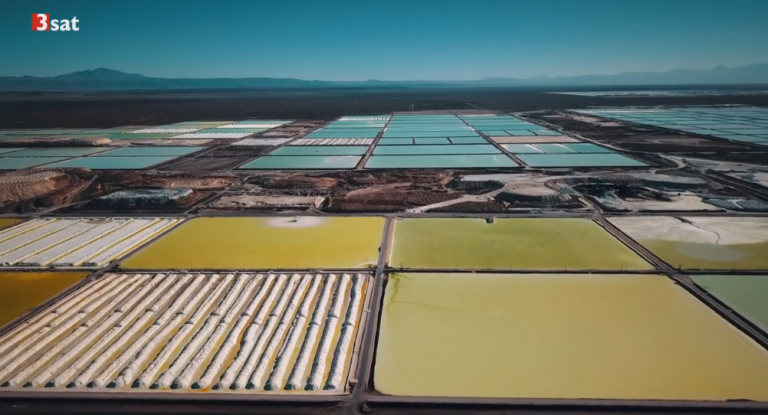 The report titled: “Batteries in twilight – The dark side of e-mobility” shows how the mining of raw materials needed for producing the massive automobile batteries is highly destructive to the environment. For example, two thirds of the cobalt currently comes from the Congo, where the mining rights have been acquired by China. Other materials needed include manganese, lithium and graphite.

Every electric car battery needs about 20 – 30 kg of lithium.

The mining of the raw materials often takes place in third world countries where workers are forced to work under horrendous conditions and no regard is given to protecting the environment. When it comes to “going green”, it seems everything flies out the window.

The report shows that one source of the lithium is the desert of northern Chile. Everyday at the mine shown some 21 million liters of ground water get pumped to the surface, where it evaporates and a sludge with 6% lithium content gets shipped to processing plants. The operations are transforming the Chilean desert landscape into a vast industrial wasteland.

The Chilean lithium mining operations are pumping out what little precious groundwater that remains and ruining the living basis of the local population. What little vegetation there was to begin with is now dying due to falling water tables. Overall, mining operations are expected to expand four-fold within the next decade and the mining companies profit while the local citizens lose their livelihoods.

The automotive companies, the buyers of the lithium batteries insist that they have strict requirements in the sourcing of their products and make sure it is done in a sustainable way. Obviously they are having little effect.

Today’s batteries for e-cars also require approx. 10 – 15 kg of cobalt, where two thirds of which comes from authoritarian Republic of the Congo. The mining rights are owned by Chinese companies. Here as well the benefits of the mining operations do not find their way to the local residents, who are forced live under horrendous conditions.

Privately operated local companies are not allowed, unless the authorities are paid bribes to look the other way. In these rogue operations, work conditions are primitive and extremely dangerous. The ZDF reports that some 20% of Congolese cobalt is extracted in this manner. Profits do not find their way down to the miners.

Meanwhile the ground around the mining villages are now perforated with vertical shafts that pose a constant danger to children who risk falling into them. Work conditions for the miners themselves is extremely dangerous. The money they earn is not enough to provide for their families. Children are forced to work and do not go to school.

Chinese companies control most of the lithium supply chain, ZDF reports, and miners are cheated by them. The valuable raw material makes its way to China, where it gets processed for the manufacture electric batteries, according to Dr. Mathias John of Amnesty International. Congolese cobalt likely is contained in the car batteries of German electric cars.

German automakers such as Mercedes insist that they make effort to ensure that their supply chains “exclusively process cobalt from industrial mines that have the proper sustainability standards.”

As electric cars begin to flood global markets, the environmental and social destruction of third world countries where the precious minerals are mined will reach ghastly proportions. The promised green utopia will remain a an illusion.