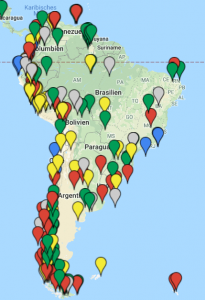 Global warming alarmist scientists like claiming that the well documented Medieval Warm Period (MWP) was merely a regional phenomenon, and not global. However a new publication by Lüning et al adds yet another study that shows the warm period from 1000 years ago was indeed global.
================================
Image source: here.

The climate of the Middle Ages is still a mystery. In many parts of the world a warming period occurred, which can still not be satisfactorily simulated by the current climate models.

The problem: natural climate factors play almost no role in the models.

It is therefore all the more important to first carry out a proper mapping of the climate for this important period. A research group led by Sebastian Lüning has presented an overview of the medieval climate in South America and now appears in the journal Quaternary International.

Here the scientists summarized a large number of case studies of the entire continent. The climate archives included pollen surveys in lake sediments of the Andes, which documented the rise and drop of the tree line.

Other studies reconstructed the oscillating shrinking and growth of Andean glaciers or dealt with tree rings. As a result, Lüning and his team found that the vast majority of the 76 individual studies indicate warming during the early 2nd millennium. The Medieval Warm Period was also strongly represented in South America. Exceptions were some coastal waters, where increased buoyancy of cold water led to a cooling.

What follows is the abstract:

The Medieval Climate Anomaly in South America
The Medieval Climate Anomaly (MCA) is a climatic perturbation with a core period of 1000-1200 AD that is well-recognized in the Northern Hemisphere (NH). Its existence in the Southern Hemisphere (SH) and the level of synchronicity with the NH is still a matter of debate. Here we present a palaeotemperature synthesis for South America encompassing the past 1500 years based on multiproxy data from 76 published land and marine sites. The data sets have been thoroughly graphically correlated and the MCA trends palaeoclimatologically mapped. The vast majority of all South American land sites suggest a warm MCA. Andean vegetation zones moved upslope, glaciers retreated, biological productivity in high altitude lakes increased, the duration of cold season ice cover on Andean lakes shortened, and trees produced thicker annual rings. Similar MCA warming occurred in coastal seas, except in the year-round upwelling zones of Peru, northern Chile and Cabo Frio (Brazil) where upwelling processes intensified during the MCA due to changes in winds and ocean currents. MCA warming in South America and the NH appears to have occurred largely synchronous, probably reaching comparable intensities. Future studies will have to address major MCA data gaps that still exist outside the Andes in the central and eastern parts of the continent. The most likely key drivers for the medieval climate change are multi-centennial Pacific and Atlantic ocean cycles, probably linked to solar forcing.”

The mapping of the South American climate is part of a wider global study on medieval climate change. The project was kindly supported by crowdfunding during the launch phase. Here all published climate reconstructions are first collected on a Google Map and then plotted and compared in detail.

In the appendix of the regional syntheses, each individual location is precisely evaluated and the resulting climate changes are discussed. The studies benefit from the great willingness by a large number of paleoclimatologists to cooperate and who readily provide their data for evaluation and discuss technical questions with the authors of the syntheses.

Great thanks to everyone involved!

6 responses to “New Study: Medieval Warm Period Not Limited To North Atlantic, But Occurred In South America As Well”