German business daily Handelsblatt here reports on a new study that suggests up to 114,000 German automotive related jobs could disappear should the switchover to electric mobility take place as planned.

According to research by the German Labor Market and Occupational Research Institute (IAB) and its publication titled “Electric Mobility 2035“, the study focuses on the economic effects of the phenomenon of electrification of the powertrain in automobiles (e-mobility).

The researchers find that over the long run, e-mobility will lead to a lower GDP and employment level, and that the change in technology may lead “to 114,000 job cuts by the end of 2035”. The report adds: “The whole economy will lose about 0.6 % of the GDP. In the scenario we assume a share of only 23 percent of electric compared to all cars in 2035.”

The following chart (Figure 28) shows the job losses as to industry sectors: 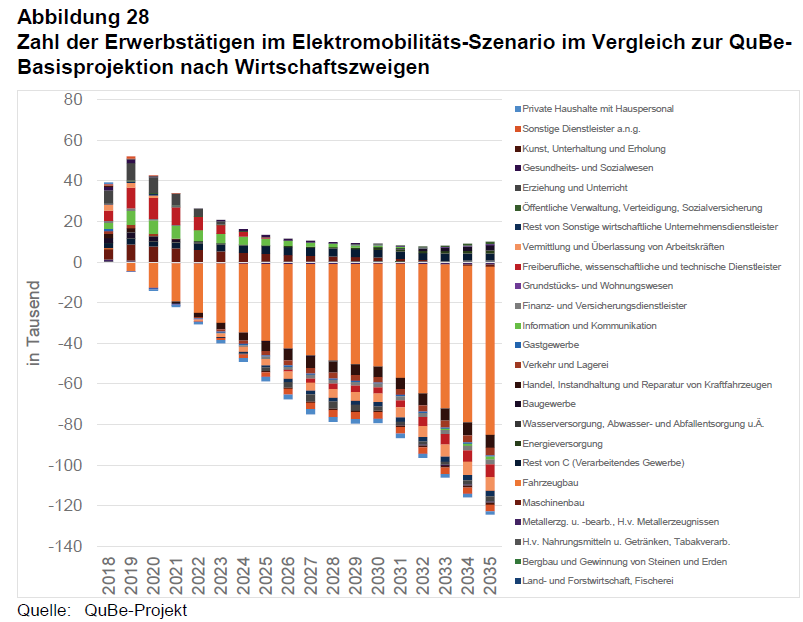 Chart shows change in number of German workers. The most workers will be lost in the vehicle production. Source: QuBe Project, Figure 28.

The findings also say the electrification of automotive power-trains will especially affect highly skilled workers negatively as the demand for specialist and expert activities will decrease with a time delay. Electric vehicles entail much simpler technology, which can be be cheaply produced in emerging countries.

According to the IAB, today less than 5% of German electric cars are imported: 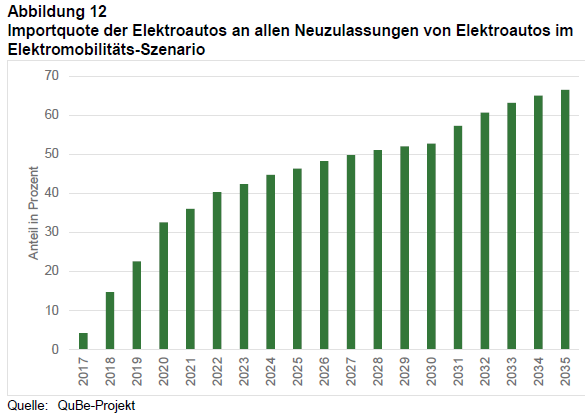 Scenario for the share of imports for electric cars, Source: QuBe Project, Figure 12.

But by 2022, the share of imported electric cars will jump to 40% and then to about 65% by 2035. If true, this means a devastating blow to Germany’s mighty automotive industry – the backbone of the German economy.

Some experts project that buying an electric car will be as straightforward as buying a household appliance, thus eliminating a variety of highly skilled technical jobs. The scale of the job losses that threaten Germany are indeed highly plausible.

But, as is the case with many forecasts looking at the future 15 years ahead, the IAB notes that their scenario “includes a lot of assumptions where further research is necessary”.