The media, alarmist scientists and many leading policymakers often tell the public “the Arctic is rapidly melting”. And if a poll were done today, a vast majority of the people in Japan and elsewhere would say this is true. Unfortunately they have become the victims of “fake news”.

Luckily we have some hard data from the Arctic. And if one looks at them, it is true that sea ice has seen a declining trend – if we go back 40 years.

Yet, if we look at the past 12 years, we see that the trend for minimum has stopped, and one could argue even reversed:

The above Arctic sea ice volume chart, which relies on data from the Danish Meteorological Institute (DMI), shows that there has even been a modest increase in the minimum sea ice volume recorded every late summer.

Overall, Arctic volume has been stable, slightly on the rise over the past 12 years, as the full year data from the DMI show: 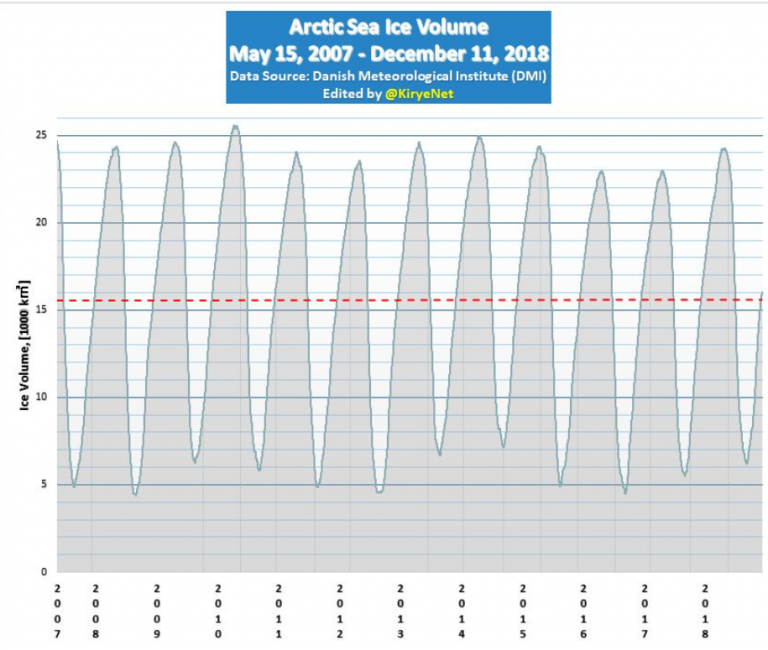 Yet, the media constantly falsely report that the Arctic sea ice is still melting away rapidly (it isn’t), and many have even made the alarms louder.

Unfortunately the media have been sloppy, lazy and misleading in their reporting of what is really happening at the poles of the Earth. If they did their homework, they’d realize their shrill headlines are inappropriate and outdated.

In early September NoTricksZone’s author Kenneth Richard presented a number of papers, where he wrote:

An accumulating collection of “headlines” taken from the 2018 scientific literature is indicating the Arctic region is no longer experiencing accelerated mass ice sheet/glacier loss, warming, or sea ice declines.”

Disservice to the public

Why the media, IPCC and many policymakers ignore this remains a mystery. It’s a disservice to the public and taxpayers who have entrusted them to conduct policymaking responsibly and honestly.

P. Gosselin contributed to this article.