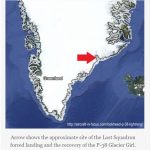 Share this…FacebookTwitterIs Greenland’s Ice Disappearing? Image Source: AVweb, August 2018  I. Emergency Landing In 1942 In July, 1942, a squadron of six U.S. P-38 fighter planes and two B-17 bombers embarked on a flight mission to England when they were suddenly bombarded by severe weather. All 8 planes were consequently forced to emergency-land on the […]