In December 2000, environment correspondent Paul Brown wrote here at The Guardian that global warming threatened “to create a dust belt around the globe” and that the Sahara had “crossed the Mediterranean” and forced “thousands to migrate as a lethal combination of soil degradation and climate change” turned “parts of southern Europe into desert.”

He added: “A fifth of Spanish land is so degraded […] and in Italy tracts of land in the south are now abandoned and technically desert. Portugal, Spain, Italy and Greece are the four EU countries already so badly affected that they have joined the United Nations Convention to Combat Desertification (CCD) which is meeting in Bonn this week.”

Brown also wrote that the spreading desertification was not confined to the EU, but that also Bulgaria, Hungary, Moldova, Romania and Russia have all reported signs of desertification and that it was spreading beyond the Black Sea and stretching as far as Mongolia. China!

Just the opposite is occurring

So since this 2000 claim made in The Guardian and the many other alarmist desertification claims coming due to climate change, we ask whether or not things have gotten worse since like they were supposed to. A brief look at precipitation data across southern Europe shows us that the opposite is more the case.

Precipitation has increased, and not decreased, and so greening is favored more than before.

What follows are the precipitation charts for some southern European countries, which are located north of Africa’s massive Sahara Desert. First we begin with Spain: 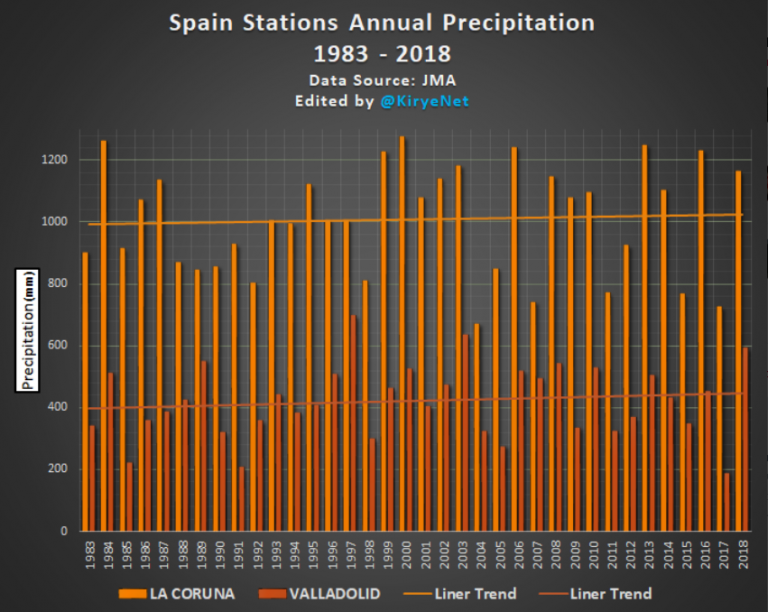 Examined are two stations in Spain with sufficiently available precipitation data. Both La Coruna and Valladolid stations show more precipitation since 1983, thus contradicting predictions of less. But the trend has not impressed the alarmists at The Guardian, who in 2016 wrote:

Southern Spain will be reduced to desert by the end of the century if the current rate of greenhouse gas emissions continue unchecked, researchers have warned.”

Next we look at France. Using data available from 13 stations across France from the Japan Meteorological Agency (JMA), here as well we find no downward trend that would aid increased desertification: 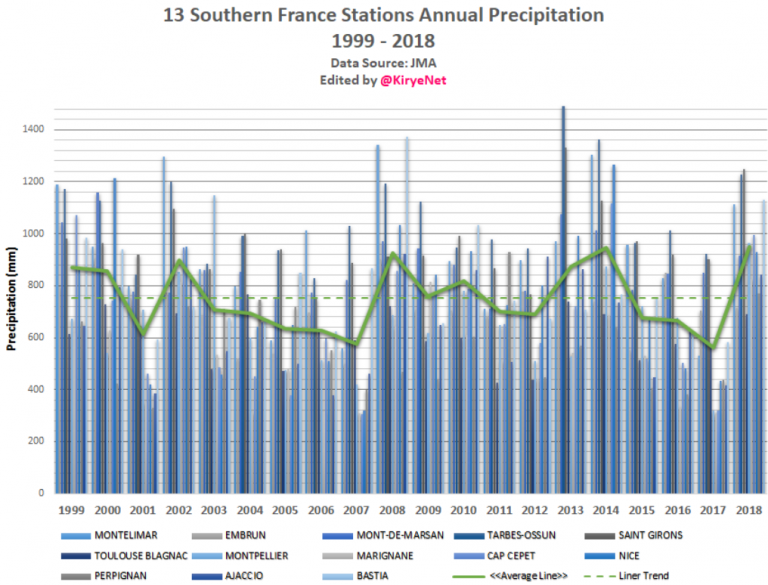 France also has five stations that go back further, i.e. to 1983: 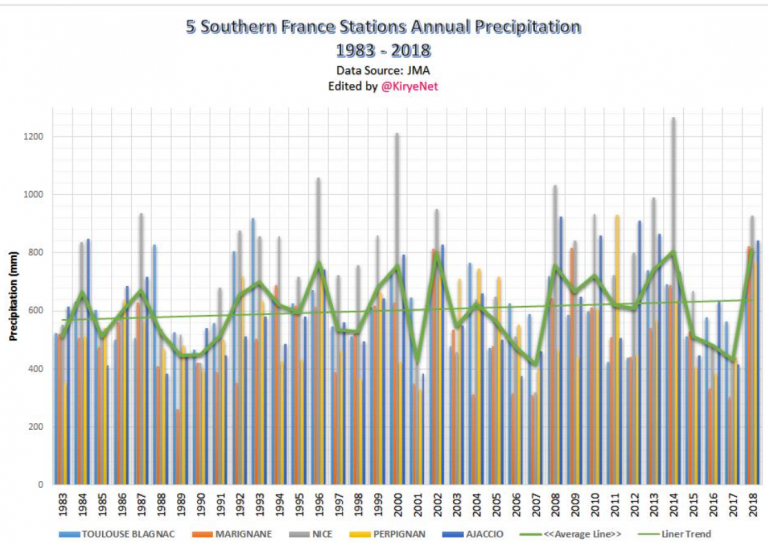 Here as well we see a rising precipitation trend, and not one that suggests precipitation is falling and so things are going to get drier.

Now we move to the southern European country of Italy, where the data from 7 stations are examined: 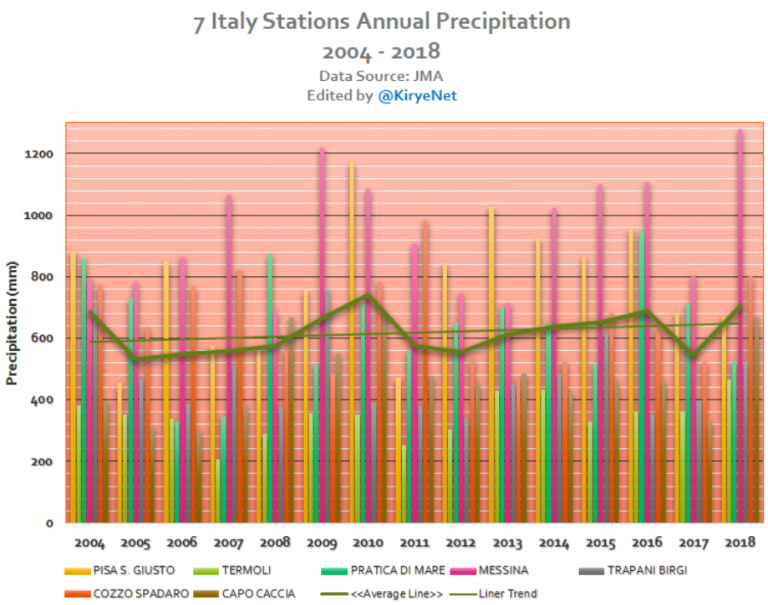 Finally we look at the best datasets from Greece, where 6 stations are plotted: 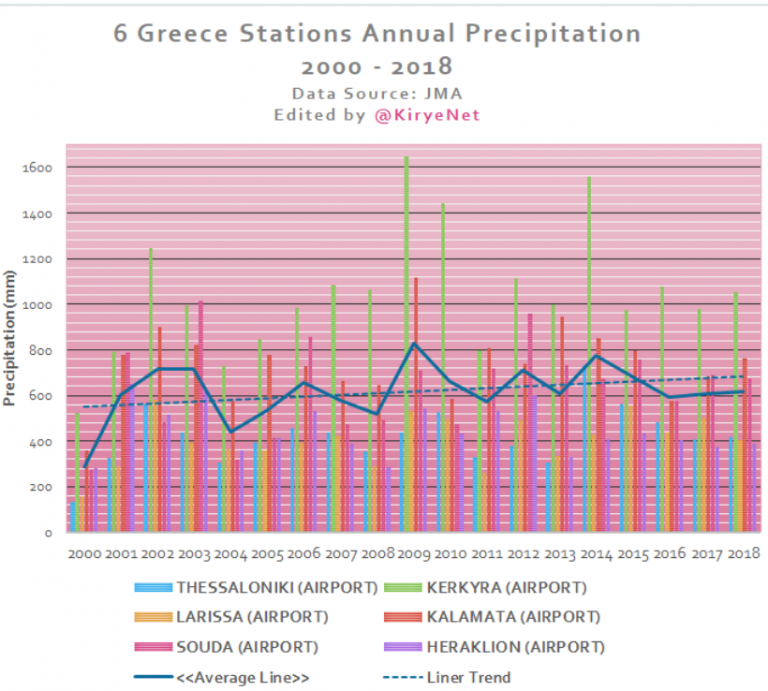 As is the case in the other southern European countries, Greece has not seen a downward trend in precipitation, rather the trend has increased noticeably.

Of course there are other factors that effect desertification, such as agriculture. However, the rainfall data over the current century shows that precipitation is rising and hampering the expansion of deserts into Europe. Contrast that to what the Guardian claimed in 2016:

Temperatures would rise nearly 5C globally under the worst case scenario by 2100, causing deserts to expand northwards across southern Spain and Sicily, and Mediterranean vegetation to replace deciduous forests.”

Clearly this is fake science that ranks on the scale of the Russia collusion hoax.

15 responses to “Year 2000 Predictions By ‘The Guardian’ Turn Out To Be Complete Failures…Southern Europe Has Become Wetter!”