Before people jump into a debate about weather with veteran Swiss meteorologist Jörg Kachelmann, they’d first better make sure that they really paid close attention at school and did their science homework.

In an debate at Twitter, the high-profile, seasoned meteorologist inadvertently exposed a shocking lack of comprehension of fundamental physics by some of Germany’s top climate officials, among them renewable energy expert Prof Volker Quaschning.

High temperatures do not cause droughts

The Twitter exchange was unleashed by Kachelmann blasting the recent junk-science-driven media hype over another year of potential drought over Central Europe, and especially the false claim made by Prof. Quaschning that higher temperatures lead to more drought and forest fires. Kachelmann called this claim: false and “complete nonsense.” Kachelmann recently explained in a t-online article he penned:

Heat does not cause forest fires and is completely irrelevant. Forest fires are caused by the fact that it is dry longer, and then some fools – intentionally or not – throw something burning into the area, or park a very hot car over dry high grass and then drive away. The temperature on the day of the outbreak of forest fires does not matter.”

In other words, Kachelmann, dumps cold water on Quaschning’s claim that higher temperature is the factor behind drought and thus forest fires and Biblical-scale misery of the sort prophesized by Green fanatics. Kachelmann explains that temperature has nothing to do with the risk level of fire, and that the factor behind it is air moisture.

Shockingly, this fundamental physics law seemed to be unknown to “top scientists” such as Quaschning and others.

Next, scientist Stefanie here tweeted a chart showing how much water a kg of air could hold versus temperature with the aim of showing Kachelmann he was wrong and that it was all about temperature: 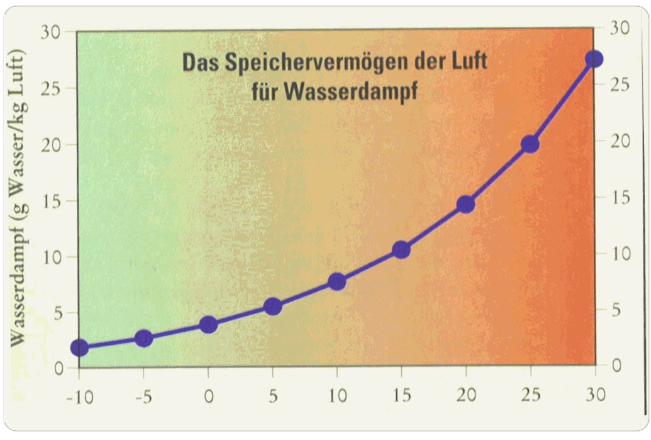 Water vapor in grams per kilogram of air versus air temperature. Source here.

But this backfired on Stefanie when Kachelmann correctly demonstrated she did not understand the chart at all and that she had no idea what she was talking about.

That these climate experts would not know that water vapor in the air is the driving factor behind drought makes one wonder what faulty physics may have gotten applied to the climate models.

Throughout the entire thread there are attempts by the climate “experts” to assert their “academic authority”.

If any trend is emerging, it is that Kachelmann, a believer in man-made warming, is tiring of the fanaticism on both sides. He recently tweeted:

But unfortunately you can only stay in the sect if you join in the chattering of all the nonsense and depart from the grounds of science because of the purpose of saving the world allows all nonsense. Green and browns are outbidding each other in terms of lack of seriousness. It is getting very wretched.”