No Reason For Panic: The Oscillating Gulf Stream 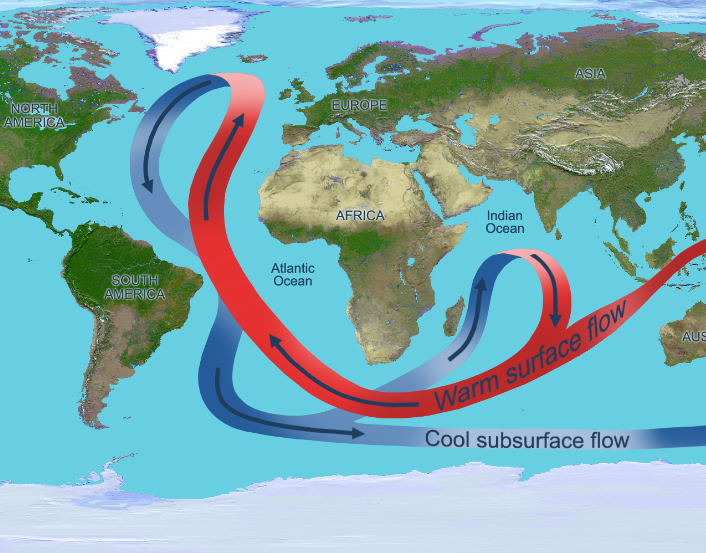 The Gulf Stream provides heating for Western Europe. Some climate activists paint horror scenarios on the wall that the Gulf Stream is slowing down or even stopping due to climate change – with fatal consequences for Europe. However, other scientists see no evidence of this in the hard data. You can find more on this discussion at our DkS archive.

In February 2019, Lozier et al. reported in Science that the models did not even correctly quantify the most important drives of the Gulf Stream. The dominant factor is not the Labrador Sea east of Canada, but the Arctic Ocean east of Greenland. See also report in The Daily Caller.

The Gulf Stream is apparently not as vulnerable to climate change as we thought. ScienceNews on 31 January 2019:

Climate change might not slow ocean circulation as much as thought

New findings from an international ocean observing network are calling into question the long-standing idea that global warming might slow down a big chunk of the ocean’s “conveyor belt.” The first 21 months of data from sensors moored across much of the North Atlantic are giving new insight into what controls the strength of the Atlantic Meridional Overturning Circulation, a system of currents that redistributes heat around much of the Western Hemisphere.

Researchers had thought the strength of that circulation, known by the acronym AMOC, was largely influenced by the sinking of cold freshwater in the Labrador Sea, between Greenland and Canada. And climate simulations suggest that the sea’s deepwater formation might slow as the world continues to warm — which also could slow down the entire Atlantic current system and possibly make temperatures on land in the northeastern United States and the United Kingdom plunge. That concept inspired the (otherwise unrealistic) 2004 climate apocalypse film The Day After Tomorrow.

This MDR report from July 2018 also deals with fundamental problems of understanding:

Does a weak Gulf Stream deliver heat to us?
A new study is causing uproar and a lot of criticism. It deals with the Gulf Stream. So far it has been said: If it becomes weaker and possibly fails to appear at all, then it gets cold. A research team from China and the USA now claims the opposite. They say that a weakening Gulf Stream is heating up the global temperature once again.”.

Also see the articles on the study in Die Welt. Backers of the tough IPCC line were horrified. Alarmist site Klimareporter does not like the study at all and calls it “provocative“. Also the climate alarmist SZ daily was also dissatisfied. It is best to have the results explained directly by the authors without filtering. What follows is the accompanying press release from the University of Washington dated 18 July 2018:

Atlantic Ocean circulation is not collapsing – but as it shifts gears, global warming will reaccelerate

A huge circulation pattern in the Atlantic Ocean took a starring role in the 2004 movie “The Day After Tomorrow.” In that fictional tale the global oceanic current suddenly stops and New York City freezes over. While many aspects of the movie are unrealistic, oceanographers are concerned about the long-term stability of the Atlantic Ocean circulation, and previous studies show that it has slowed dramatically in the past decade. New research from the University of Washington and the Ocean University of China finds the slowdown is not caused by global warming but is part of regular, decades-long cycle that will affect temperatures in coming decades. The paper [Chen & Tung 2018] was published July 18 [2018] in Nature.

“Climate scientists have expected the Atlantic overturning circulation to decline long-term under global warming, but we only have direct measurements of its strength since April 2004. And the decline measured since then is 10 times larger than expected,” said corresponding author Ka-Kit Tung, a UW professor of applied mathematics with an adjunct appointment in atmospheric sciences.

“Many have focused on the fact that it’s declining very rapidly, and that if the trend continues it will go past a tipping point, bringing a catastrophe such as an ice age. It turns out that none of that is going to happen in the near future. The fast response may instead be part of a natural cycle and there are signs that the decline is already ending.”

The results have implications for surface warming. The current’s speed determines how much surface heat gets transferred to the deeper ocean, and a quicker circulation would send more heat to the deep Atlantic. If the current slows down, then it will store less heat, and Earth will be likely to see air temperatures rise more quickly than the rate since 2000.

“The global climate models can project what’s going to happen long-term if carbon dioxide increases by a certain amount, but they currently lack the capability to predict surface warming in the next few decades, which requires a knowledge of how much the excess heat trapped by greenhouse gases is being absorbed by the oceans,” Tung said.

The Atlantic Meridional Overturning Circulation, or AMOC, is a conveyor belt that brings surface water northward in the Atlantic; from there, the heavier salty water sinks and returns at depth from the Labrador and Nordic seas, near the North Pole, all the way south to the Southern Ocean. Most people are interested in what happens at the surface — the Gulf Stream and associated Atlantic currents carry warmer water north, bringing mild temperatures to Western Europe.

But the new paper argues that the most important step, from a climate perspective, is what happens next. In the North Atlantic, the saltier water from the tropics sinks almost a mile (1,500 meters). As it does, it carries heat down with it away from the surface.

Changes in the strength of the AMOC affect how much heat leaves our atmosphere. The new study uses a combination of data from Argo floats, ship-based temperature measurements, tidal records, satellite images of sea-surface height that can show bulges of warm water, and recent high-tech tracking of the AMOC itself to suggest that its strength fluctuates as part of a roughly 60- to 70-year, self-reinforcing cycle.

When the current is faster, more of the warm, salty tropical water travels to the North Atlantic. Over years this causes more glaciers to melt, and eventually the freshwater makes the surface water lighter and less likely to sink, slowing the current.

When the AMOC is in a slow phase, the North Atlantic becomes cooler, ice melt slows, and eventually the freshwater melt source dries up and the heavier saltier water can plunge down again, which speeds up the whole circulation.

The new study argues that this current is not collapsing, but is just transitioning from its fast phase to its slower phase – and that this has implications for heating at the surface.

From 1975 to 1998, the AMOC was in a slow phase. As greenhouse gases were accumulating in the atmosphere, Earth experienced distinct warming at the surface. From about 2000 until now, the AMOC has been in its faster phase, and the increased heat plunging in the North Atlantic has been removing excess heat from the Earth’s surface and storing it deep in the ocean. “We have about one cycle of observations at depth, so we do not know if it’s periodic, but based on the surface phenomena we think it’s very likely that it’s periodic,” Tung said.

The new paper supports the authors’ previous research showing that since 2000, during which observations show a slowdown in surface warming, heat has accumulated deep in the Atlantic Ocean. The new study shows this is the same period when Atlantic overturning circulation was in its fast phase.

Recent measurements of density in the Labrador Sea suggest the cycle is beginning to shift, Tung said. That means that in coming years the AMOC will no longer be sending more of the excess heat trapped by greenhouse gases deep into the North Atlantic. “The good news is the indicators show that this slowdown of the Atlantic overturning circulation is ending, and so we shouldn’t be alarmed that this current will collapse any time soon,” Tung said. “The bad news is that surface temperatures are likely to start rising more quickly in the coming decades.”

Figure: The top panel shows global average surface temperature changes since 1950, with two periods of slower change and a period of rapid warming from 1975 to 2000. The lower panels show the strength of the Atlantic overturning circulation. The blue (and, on the right, purple) curve is the salinity north of 45N, an indirect measure, or proxy, for the AMOC strength. The green curve is an established proxy of AMOC.Ka-Kit Tung/University of Washington.”

Deep temperatures have been measured in the North Atlantic since the 1940s,” reports Professor Monika Rhein of the University of Bremen. These temperatures are an indirect indication of the strength of the Gulf Stream. “These measured data show strong fluctuations, but no trend in any direction,” says the oceanographer, summing up the long series of measurements. A decrease in the Gulf Stream has therefore not yet been observed.”

The German Climate Consortium published a Brochure on the Gulf Stream in July 2018.

Thibodeau et al. 2018 2018 analyzed oxygen isotopes of foraminifera of a Northwest Atlantic sediment core and found that the attenuation of the Gulf Stream (AMOC) in the 20th century led to a Gulf Stream minimum in the 1970s. The Gulf Stream was also particularly weak during the Little Ice Age, a natural cold phase. See also report in the Daily Mail.

McCarthy et al. 2018 found that a part of the Gulf Stream variability was related to the NAO ocean cycle.

The observed AMOC overturning has decreased from 2004–2014, but it is unclear at this stage whether this is forced or is internal variability.

Lique & Thomas 2018 warned that the Gulf Stream could change over time. Report on this at Scinexx:

Sinking zones of the Atlantic circulation could shift considerably

Shifted engine of circulation: Climate change could not only weaken the Atlantic circulation flow, but could also shift it, as a simulation now suggests. The large sink zones of warm water would no longer lie off Greenland, as they do today, but in the Arctic Ocean and the subtropical Atlantic. This, however, could have a strong influence on the current – and also alter the heat exchange and the buffer effect of the ocean, as the researchers report in the journal “Nature Climate Change”.