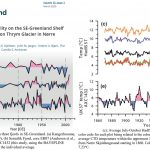 Share this…FacebookTwitterA new reconstruction for SE Greenland (1796-2013) shows temperatures have risen and fallen without any hockey-stick-like trajectories for the last 200+ years. Temperatures were warmer than today in the 1920s and 1940s and even briefly during the 1800s. If rising CO2 concentrations are a driver of Arctic warming, the 19th and 20th centuries should […]

Share this…FacebookTwitterHappy birthday EEG! The now famous German green energy feed-in act celebrates its 20-year birthday. The law is loved and hated by many. While activists like Claudia Kemfert wish that the lavish subsidies would get expanded even further, others have different views on the situation. Cost explosion Former environment minister Jürgen Trittin’s scoop of […]

Share this…FacebookTwitterDictatorship for a good cause…the march to tyranny: The public can be convinced “to accept even the most serious encroachments on fundamental rights,” writes a German public law professor, state high court judge at his blog. Like the corona crisis, in the face of the climate crisis it’s time to seriously encroach on fundamental […] 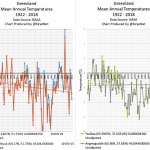 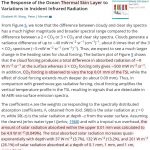 Share this…FacebookTwitterDuring the winter of 2016-’17 nearly 25,000 Italian citizens died from the seasonal flu. No one blinked. In well over 3 months since its purported inception, the COVID-19 virus is claimed to be responsible for less than 50,000 deaths globally (as of the 1st of April). Every year, about 500,000 people from across the […] 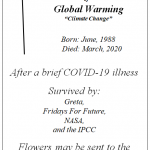 Climate Crisis RIP: People Will Be In No Mood To Stay In Panic Mode After COVID-19 Scare Ends

Share this…FacebookTwitterCOVID-19 has not only been a nightmare for the public worldwide, but especially for “climate crisis” alarmists who have seen their agenda disappear from the media radar. And it’s going to stay off the radar for quite some time. People can take only so much panic and restriction. Once the COVID-19 crisis subsides, and […]