Yesterday I wrote about plans to transform 20 million square meters of a 1000-year old forest into an industrial wind complex comprising 60 200+ meter tall turbines with a rotor diameter of 150 meters and a rated capacity of 5.6 MW

True nature conservationists are in shock at the proposal, which is now in its final approval phase. How can anyone even consider such environmental destruction? Blame it on corrupt “environmentalists like the German Green Party and groups like NABU.

All of this is being made possible by the relaxation of otherwise strict environmental standards all in the name of the superordinate “climate change protection”. 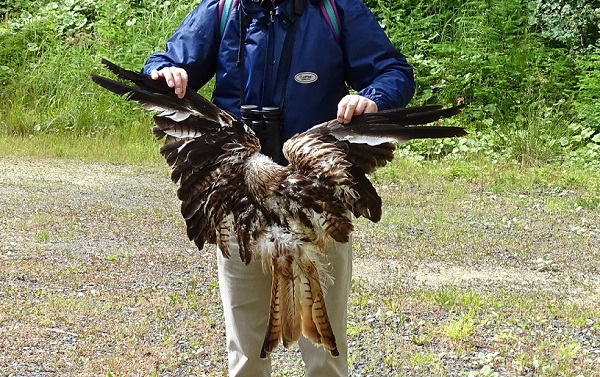 Nothing to do with environmental protection. Photo: red kite struck by wind turbine blade / NI archive.

NABU and the Greens say auf Wiedersehen to environmental protection

NABU and Bündnis 90/Die Grünen (German Green Party) have presented a joint strategy paper to accelerate the allegedly “nature-compatible” expansion of wind energy, says Naturschutzinitiativ, “The paper is rather a farewell of the once bird protection association for nature and species protection.

The paper calls for “electricity quantity-related expansion targets” with the aim of “exceptional reasons of public safety under species protection law”. As a consequence, the strategy paper calls for a central weakening of nature conservation, which is obviously intended by the authors, or at least accepted by them.

Provisions in the paper are aimed at completely releasing the approval procedures from the urgently needed constitutional examination for the wind power industry.

Naturschutzinitiativ also states: The wording of one provision in the paper is an attempt to finally undermine the EU legal protection of individuals of specially protected species by taking it to the population level. The formulation of NABU and the Greens is a 1:1 implementation of the goals of the wind power lobby.”

Under the guise of climate protection

The German government clearly wants to comply with the wind power industry’s demand to exempt nature-damaging interventions in the context of “climate protection” from the compensation obligations under nature conservation law, states the press release

Big Wind should be “as unhindered as possible”

The remaining points of the paper can be summarized under the recognizable overall goal of the paper: To enable the wind power industry to operate in a framework that is as unhindered as possible.

The paper is no basis for a “peace” deal between the wind power industry and nature. It is rather the parting of the former bird protection environmental group from nature and protection of species,” says Harry Neumann, Federal Chairman of the Nature Conservation Initiative e.V. (NI) and Dr. Wolfgang Epple.

“The wind power industry cannot be expanded in a “nature-compatible” way.

NABU has apparently given up both the protection of large-scale near-natural landscapes and the technically sound protection of species by adopting the Green Party platforms and by submitting to the demands of the wind power lobby,” said Harry Neumann and Dr. Wolfgang Epple.