With a Corona lockdown in Stuttgart and diesel engine bans, one would think the fewer diesel cars on the streets would lead to less air pollutants. But far from it! Air measurement values remain unchanged through the significantly reduced traffic volume!

Diesel car driving bans together with the reduced car traffic caused by the lockdown have shown to have had no effect on the values provided by air measuring stations.

The diagrams for nitrogen dioxide of the past days show fluctuation around values of between 40 and 50 µg/m3. Germany’s most famous measuring station, the Stuttgarter Tal Am Neckartor, showed a nitrogen particulates concentration of 44 µg/m3 at 10 a.m. on Dec. 21st.

Similarly, NO2 emissions at the monitoring station in Bad Cannstatt fluctuated about 40 µg/m3. Incidentally, the 12-month mean value there is given as 23 µg/m3, i.e. well below the applicable limit values: 40 µg/m3 for the annual average, 80 µg/m3 for indoor areas, and as much as 950 µg/m3 at the workplace.

In the United States, at 100 µg/m3, limits are even more than twice as high as on German roads.

Daily NO2 particulates measurements at Stuttgart Am Neckartor. Values fluctuated about 50 µg/m3, well below the 200 µg/m3 limit.

This is also the result reached by measurement specialist Martin Schraag, who has also compared the values with the reduced traffic flow. He summarizes: “The daily pattern of the traffic measuring points Am Neckartor and Pragstraße has practically not changed since the lockdown started” on December 16th.

At Pragstraße, a long incline from Neckar to Pragsattel, the peak occurred on Dec. 18 at 5 p.m. after the lockdown had started. Otherwise, we see values fluctuating around 40 µg/m³ here as well, with typical maxima occurring at 5 p.m.” 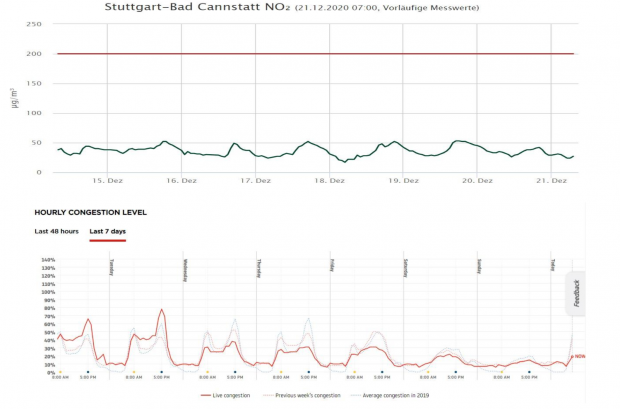 Schraag comments on the far-reaching driving bans in Stuttgart:

It is unlikely that these values are caused by diesel cars. Even the Euro 5 class diesel cars have been banned from the small green zone of Stuttgart for months! During the lockdown in April, Euro 5 diesel cars were only banned on single routes, and control was still lax.”

In addition to the lockdown, Stuttgart has probably the most extensive driving bans in German cities: diesel vehicles of the Euro 3 and 4 standard have not been allowed to enter the capital of Baden-Württemberg since January 1, 2019. Affected by the driving ban are not only some particularly busy streets in the city center as in other cities, the ban zone extends to Kornwestheim, Gerlingen and applies to the suburbs, which are located up on the Fildern – rather rural areas with lesser development. Even new Euro-5 diesels have been banned from downtown Stuttgart since July 1, 2020.

Bans based on false assumptions

The reason for the bans given by Baden-Württemberg’s Transport Minister Winfried Herrmann (Green Party) was that the underlying calculation models were very good. He also used the not particularly accurate readings at Pragstraße obtained with old passive recorders – a continuously measuring station had only existed there since October – and a computed projection for the year 2021 as justification for barring Euro-5 diesel from Stuttgart.

In doing so, he ignored the fact that the new Rosenstein Tunnel would transfer considerable traffic flows underground from 2021 onwards and would make a significant contribution to relieving traffic on the Pragstrasse. The city of Stuttgart had even described this in its clean air plan some time ago. 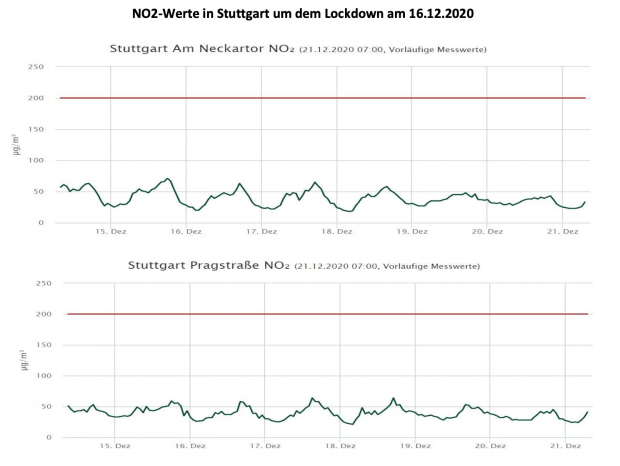 Forcing drivers out of their cars

The head of the Deutsche Umwelthilfe e.V. (German Environmental Aid Association) and frequent flyer Jürgen Resch has also been overrunning Stuttgart with lawsuits because the extremely low limit values were being exceeded. Only driving bans for diesel vehicles could lower the values and save human lives, he argued. And the administrative judges waved such lawsuits through.

The economic consequences in the city have been dramatic. Car owners have had to sell off their three or four-year-old cars. Many of which are now being driven in countries in Eastern Europe.

So after this fundamental fight against diesel in the city where the car was invented, one would expect air quality levels in the city to have changed significantly due to the lockdown and the drastically reduced car traffic.

But that is not been the case!