UPDATE 1: Temperatures are well below freezing now with winds up 60 km/hr. Transportation has become largely paralyzed, with the German Railway announcing much service has been suspended. Snow is expected to continue until this evening. https://www.bild.de/

A winter blizzard is set to strike Central Europe, bringing with it the potential to wreak power outage havoc. Temperatures will plummet to as low as -15°C accompanied by bone-chilling high winds. Closed shops due to COVID-19 are leaving citizens unprepared. A protracted power outage would be devastating.

In the coming hours, a high pressure system situated over Scandinavia and storm Tristan to the south will collide over central Europe and develop into dangerous weather conditions over one of Europe’s most populated regions, North Rhine Westphalia Germany. 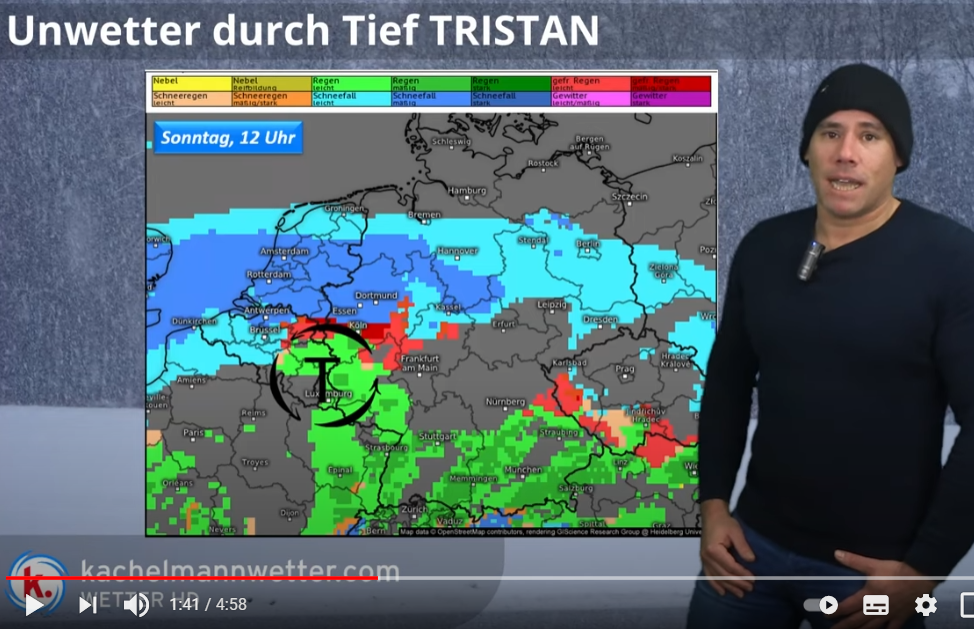 There are some major problems with this storm that will test the German power grid stability and even possibly the citizens’ ability to fend for themselves.

First will be the band of freezing rain that is forecast across the Ruhr region of North Rhine Westphalia. According to Kachelmannwetter.de, the freezing rain period could last hours and thus lead to heavy weight loads on power transmission structures as ice builds up. Lines could collapse.

To make matters worse, high winds will further exacerbate the loads on the already ice-coated power transmission infrastructure – thus increasing the probability of power line structural failure and an ensuing power blackout, which in turn could cascade and threaten the European power grid.

Such a blackout would not be unprecedented. In 2006, a major European blackout was caused by a disconnection of a powerline crossing in northwest Germany. The power outage quickly cascaded across Europe, extending from Poland in the north-east, to the Benelux countries and France in the west, through to Portugal, Spain and Morocco in the south-west, and across to Greece and the Balkans in the south-east.

Also just last month a major European blackout was narrowly averted. The cause: wintry weather, which was mild compared to what is forecast to hit soon.

Wintry weather causing a blackout also occurred on November 25, 2005, in northwest Germany when the region was hit by a snow storm. Power transmission lines, which had been poorly maintained over the previous years, collapsed under the weight of ice and caused a large blackout. According to power company RWE, around 250,000 people in 25 municipalities lost power.

Another problem with this weekend’s coming storm – in addition to high winds and ice – is the fact that Germany’s power grid is more unstable than ever – thanks to the wildly fluctuating supply from wind and solar energy. Also a number of baseload-providing nuclear and coal power plants have been taken out of service, thus further destabilizing the country’s and continent’s power grid.

The forecast weather conditions mean almost zero solar energy, and the expected high winds may necessitate the shutdown of wind turbines or cause wild feed-in fluctuations. One thing is certain, the grid will be challenged over the coming hours and days.

Most likely the grid will hold up and keep everyone out of the cold and darkness. But the bad news is that in the wintertime the country’s power grid has turned into a game of energy roulette and citizens have to rely on “a little luck” every time the weather turns stormy and frigid cold – thanks in large part to disastrous energy policies by the German government.

The worst time for any blackout is during a period of blizzard and bitter cold. People can freeze to death quickly. In such times they rely more than ever on a stable power supply.

What if there’s a longer term blackout?

For my wife and I here in northwest Germany, we would be toast.

With this weekend’s forecast high winds and temperatures dropping to near -15°C, we’d not only lose both power but also heat. Our natural gas furnace is controlled electrically, so it would cease to function too. Within hours the house would turn very cold and uninhabitable. We don’t have a woodstove or a fireplace. We’d have to move in with friends or relatives who have wood heat.

Without heat at home, we could just stay at a hotel, right? Wrong. They’re closed too – because of COVID. So are bars and restaurants.

All the ingredients for a perfect disaster

Across the country, many people face the same scenario. Most would somehow get by, I’m sure. But if a blackout should occur, many will risk freezing to death in large part because of the self-inflicted green energies grid instability and the Corona lockdowns making it impossible for them to prepare properly.

We can almost see the perfect disaster brewing.

Unfortunately, this is what the government has left its citizens with: hope for the best! A game of energy Russian Roulette. The winter bullet is in the chamber. We can only hope to miss it.