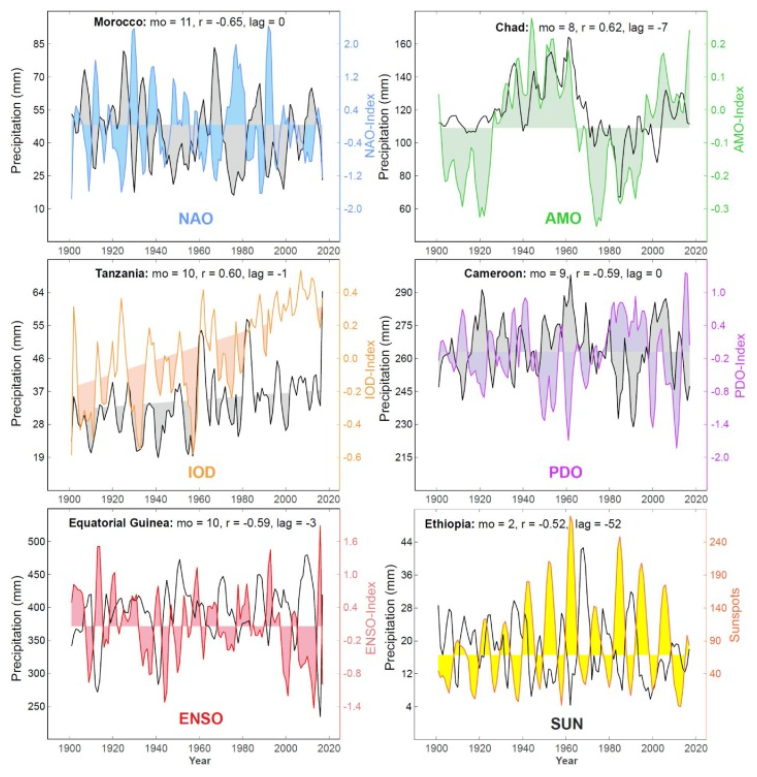 A new study analyzes patterns of natural rainfall variability and can provide crucial assistance to African countries in seasonal rainfall forecasting for agriculture and protection against droughts & heavy rains.

Sufficient rainfall is the basic condition for high-yield agriculture and food security for the population. Until recently, however, it was not possible to reliably predict rainfall several months in advance, which repeatedly led to unexpected crop failures. For some years now, however, progress has been emerging. The literature has repeatedly reported exciting correlations between temperature and air pressure patterns on the world’s oceans with rainfall and droughts in Africa and on other continents.

A group of researchers led by Horst-Joachim Lüdecke wanted to know more and meticulously searched for patterns in the monthly rainfall data of 49 African countries for the period 1901 to 2017 using statistical methods.

The scientists compared the rainfall fluctuations with five oceanic indices of natural origin that are firmly established in science, as well as with solar activity. The evaluation revealed a large number of robust correlations across the African continent with characteristic seasonal patterns. It has been known for some time that the Atlantic Ocean influences precipitation in Morocco and the Sahel via the so-called Atlantic Multidecadal Oscillation (AMO) and North Atlantic Oscillation (NAO). In East Africa, influences from the Indian and Pacific Oceans have been reported so far.

Lüdecke and his team were able to confirm these connections and add many more relations, differentiated by month with high temporal resolution.

Since some of the correlations have a time lag of up to 11 months, valuable forecasting opportunities are now opening up. These are of great practical use for agricultural planning as well as for protection against droughts and heavy rainfall. Horst-Joachim Lüdecke explains: “At the beginning of the year, for example, parts of Namibia experienced heavy rainfall that caused destructive floods. Our evaluation showed that rainfall intensity in southwest Africa regularly increases in the presence of a negative NAO ocean cycle. So in the future, appropriate precautions can be taken in the region when such a constellation looms again.”

Co-author Sebastian Lüning from the Institute of Hydrography, Geoecology and Climate Sciences describes another example: “The water level of Lake Victoria in East Africa fell to a historic low in 2006, which was cause for concern at the time. Subsequently, however, the lake level rose again and reached an all-time high at the end of 2020. Today we know: The driver of the changes is apparently the so-called Indian Ocean Dipole. When the index is positive, the lake level of Lake Victoria typically rises and then falls again when the index is negative [See article here]. We were also able to prove such a relation in our study for the rainy season in October and November.”

A co-author from the Technical University of Berlin was instrumental in the complex statistics of the study.

The team of authors hopes: “Our results give local and humanitarian planners a good tool to better assess the drought risk, which changes from year to year. This will allow for the timely creation of additional irrigation opportunities in agriculture or the purchase of food in particularly dry years.”

The study was published in early March in the renowned journal “Journal of Hydrology – Regional Studies” and can be downloaded free of charge. This was particularly important to the authors, as the results are thus freely available to all colleagues at African universities and research institutions. The publication fee was kindly covered by the sponsor Jens Kröger.

The original publication can be downloaded here free of charge (open access). Another link to the appendix with numerous additional analyses and data can be found in the online article in Appendix A.