Since Nature Activists Brought The Wolf Back To Germany, Humans Threatened As Encounters Rise

People in fear: Because of efforts by activists, wolves are back in Germany, encounters with humans are rising rapidly and livestock are increasingly falling prey. One expert warns humans may be next as wolves appear in towns and villages. 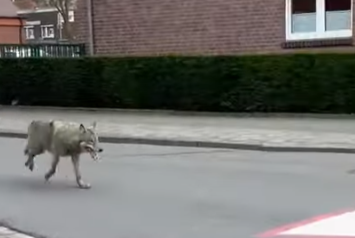 Earlier wolves had disappeared from the densely people populated German landscape. But since 2000 nature conservationists have succeeded to bring the wolves back. There’s no need to worry, they insist, wolves are timid animals that mind their own business, and won’t get the idea of seeing humans as prey.

But reports of wolf encounters have been increasing across northern Germany, for example here. A woman walking her dog in the forest recently crossed paths with a pack of 5 – 6 wolves. “Immediately, some wolves rushed back, looked in her direction, came closer and showed curiosity.”

As trends in Germany are showing, the reintroduced wolves are not only crossing paths with humans in the forest, but are also now venturing into towns in their search for prey. The north German wolf population is estimated to be over 1000, with estimates projecting the number will be 14,000 “soon”!

Last month a wolf was filmed trotting through the Lower Saxony town of Lohne, not far from where I live.

Nature and game authorities, however, quickly downplayed the incident, assuring that the wolf posed no danger to anyone.

“The wolf had more stress trying to disappear again into the nature than anything else,” local wolf advisor Ulrich Heitmann told Nordwest TV. “People are not among its prey.”

Though a lone wolf wandering into a town, seemingly lost, is of practically no threat to inhabitants, the mere fact that one would appear in a town is a sign that people are a step closer to becoming potential prey later on, experts warn.

Canadian wolf researcher, biologist, Valerius Geist is not surprised that wolves are increasingly encroaching. “If people don’t fight back, the wolves will win,” he says. See Nordkurier here.

Though lone wolves may appear timid and harmless at first, Geist warns attacks on humans are preceded by what he calls the “seven stages of habituation”:

Stage 1: Deer and other prey like wild boar appear more often in villages or cities as they flee from the wolf.

Stage 2: Wolves appear at human dwellings, especially at night. Wolves can be heard howling by residents. This means they are moving closer.

Stage 3: Wolves show themselves during the day. “This is currently the case almost every day in the German state of Mecklenburg-Western Pomerania,” reports Nordkurier here. “They observe people doing their daily chores and even learn how to open garden gates by simply watching them, for example, says Valerius Geist.”

Stage 4: They attack dogs and farm animals near houses – even during the day. At this point, the wolves have learned that they can do so without consequences.

Stage 5: Farm animals attacked more frequently. Farmers are not allowed to shoot the wolves because they are strictly protected.

Stage 6: Wolves appear to be tame and may “nudge walkers with their noses” and can be chased away – but they don’t go very far. According to Geist and the Nordkurier: “They are just beginning to discover humans as prey and testing how they behave when attacked.”

Stage 7: The wolves have lost all their shyness towards humans, who at this point are now on the menu.

The Nordkurier writes: “Valerius Geist is convinced that scientists and politicians have played down wolves over the past 100 years. Wolves do kill people, but such incidents have not been communicated.”

Tragedy in the works?

So what is it going to take for officials to wake up to this reality? A schoolchild taking the path through the forest on the wrong day?

Wolves, like bears and cougars – belong deep in the forests and not in the towns, farms and villages. Let’s hope that nature conservationists will recognize this and stop viewing these predators as cute and cuddly.

14 responses to “Since Nature Activists Brought The Wolf Back To Germany, Humans Threatened As Encounters Rise”