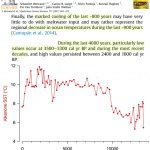 Share this…FacebookTwitterIt was previously thought the northern limit for Southern Hemisphere sea ice was 55°S. But recent declines in surface air temperatures in southernmost South America have led to sea ice formation creeping 80 to 100 kilometers further north than previous estimates. Since 2000, sea ice has been extending well into 54°S. The southernmost tip […]