Also spring, 2021, comes in cooler than normal. Spring in Germany hasn’t warmed at all over the past 30 years

The preliminary results for the meteorological spring (March-May) and the month of May have come in for Germany. 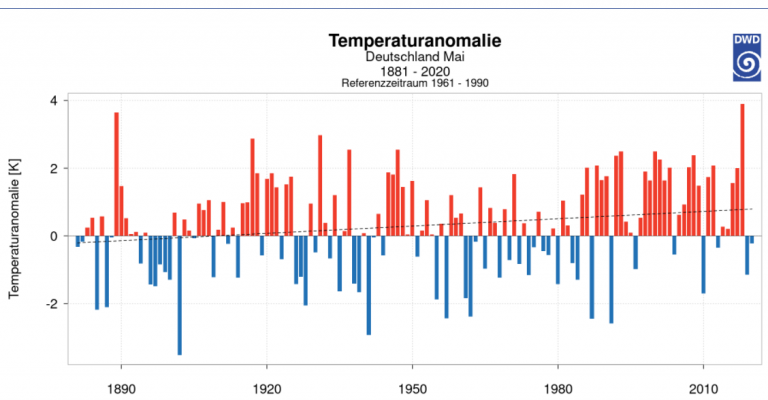 Germany’s May 2021 temperature anomaly (yet to be entered on chart) was 1.4°C below the 1961-1990 reference period mean, making it among the coldest on record. Source: DWD.

Much cooler, wetter and cloudy than normal

According to Germany’s DWD national weather service, using data recorded from some 2000 stations across the country, May’s mean temperature came in at 10.7°C, some 2.4°C cooler than the 1991-2020 mean.

Strangely, the DWD compares the May result to the ancient 1961-1990 reference period. By doing so, they determined that the mean May temperature was only 1.4°C too cool. Compared to the current and warmer reference period 1991 to 2020, the deviation was -2.4 degrees.

May-2021 also saw very little sunshine across Central Europe. With about 165 hours of sunshine in May, it was well below the mean of 202 hours using the period 1961 to 1990. Compared to the new 1991 to 2020 reference period, the negative deviation was about 23 percent less sunshine.

Looking at the meteorological spring March 1st to May 31st) for Germany, the DWD reports that “spring 2021 was clearly too cool”, despite slightly above average sunshine. Spring hasn’t really warmed in 30 years – a fact that the DWD never brings up.

At 7.2°C, the average temperature in spring 2021 was -1.7°C below the value of the 1991 to 2020 reference period. The decisive factors for the negative deviation were the coldest April in 40 years and the very cool May. The lowest temperature was recorded on April 6 in Meßstetten in the Swabian Alb region with -13.6 °C.

Of course, the activist DWD again highlighted the ancient, wetter 1961-1990 reference period, because this allowed them to say spring came in drier than normal for the eighth consecutive year!

In Germany, when reporting on weather averages, the DWD chooses its reference periods based on what trends it wants to convey to the public. Using the 1961-1990 period allows the DWD to make it look like its getting warmer and drier.