171 scientists say European policymakers have grossly miscalculated the CO2 budget of e-cars in 2030 and that in reality CO2 emitted would be MORE THAN TWICE AS HIGH as assumed: 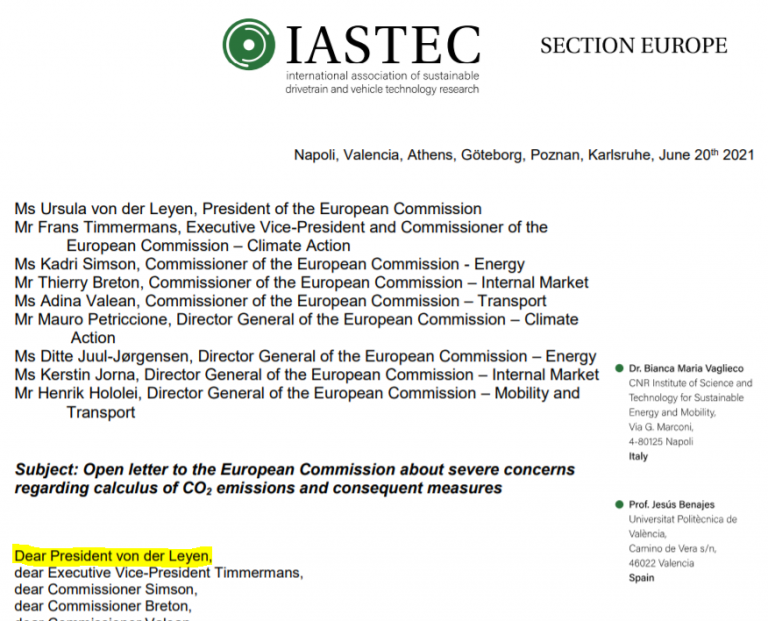 The 171 scientists say policymakers have “grossly miscalculated the CO2 budget of e-cars in 2030” and that in reality CO2 emitted would be more than twice as high as assumed.

The IASTEC signatories of this letter are representatives of technical universities with research focus in the field of energy, vehicle and drivetrain technology in Europe.

After studying many position papers, drafts and even reviewed scientific publications and analyzing political declarations there are deep concerns of the signees, that the fundamental derivation of CO2 emissions of the sector electricity is based on an insufficient calculus.”

For example, the scientists calculate that a VW ID.3 electric vehicle would “cause” 30 tons of CO2 during its “life cycle” (15 years, 220,000 km) instead of 14 tons during operation through the power grid. In contrast, the CO2 footprint of a diesel full hybrid fueled with R33 (67% fossil fuel, 33% biofuel) would be even better.

As a consequence we must inform you, that due to the typically unnoticed miscalculation the CO2 saving potential of additional contributors of the sector electricity is much more limited than expected by many politicians and communicated! This situation clearly is in contrast to the recommendations of quick CO2 reduction of IPCC.”

9 responses to “171 Scientists: CO2 Budget Of Electric Mobility “Twice As Big As Assumed” By European Leaders”