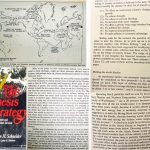 Share this…FacebookTwitterIn his 1975 book The Genesis Strategy, the late climate scientist Dr. Stephen Schneider reviewed contemporary climate modification proposals to reduce the severe 1960s and 1970s droughts, floods, and extreme weather…which were at that time associated with the ongoing global cooling. One proposal was to eliminate the Arctic’s sea ice by having aircraft dump […]