In his 1975 book The Genesis Strategy, the late climate scientist Dr. Stephen Schneider reviewed contemporary climate modification proposals to reduce the severe 1960s and 1970s droughts, floods, and extreme weather…which were at that time associated with the ongoing global cooling. One proposal was to eliminate the Arctic’s sea ice by having aircraft dump black soot on the ice pack. 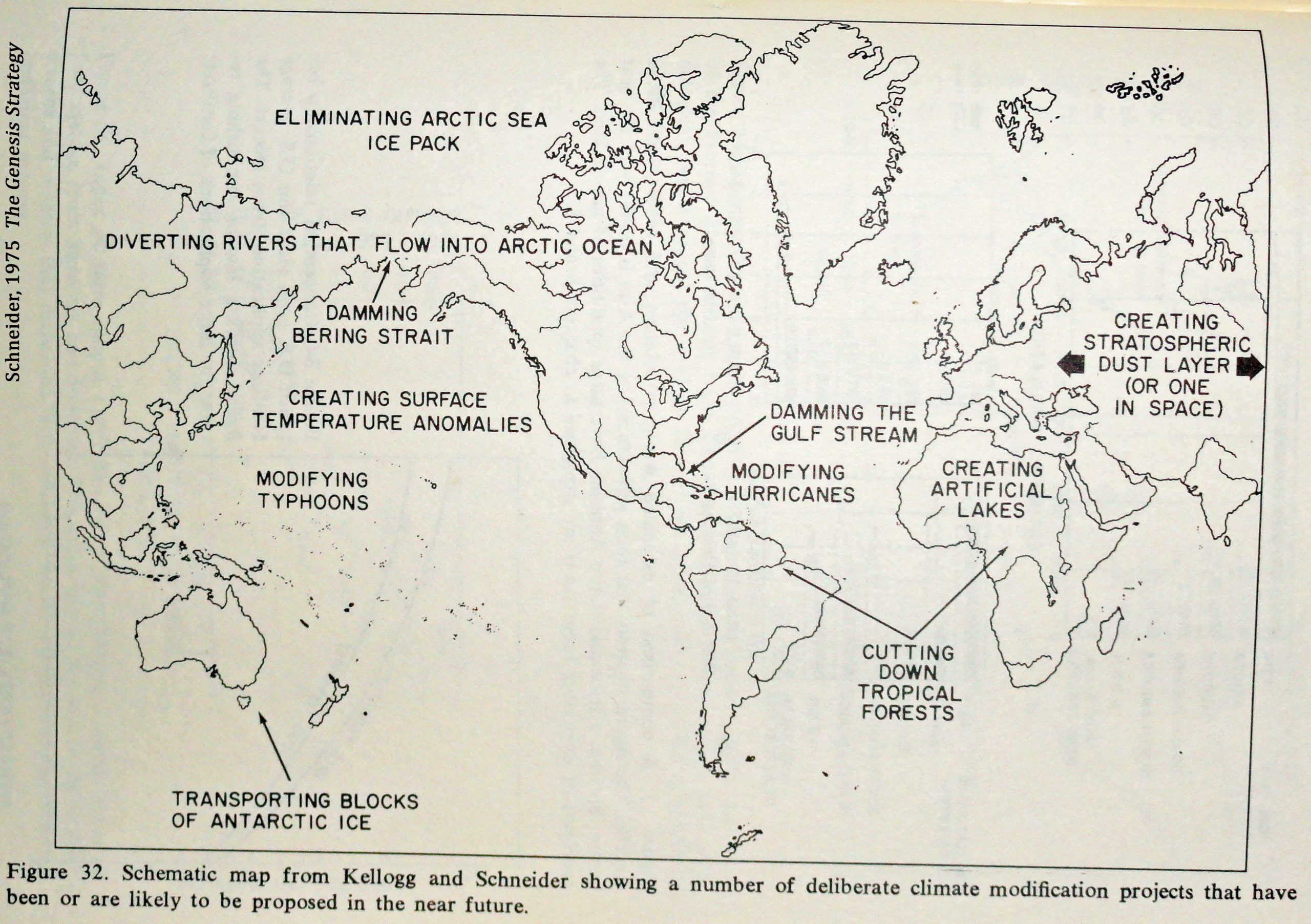 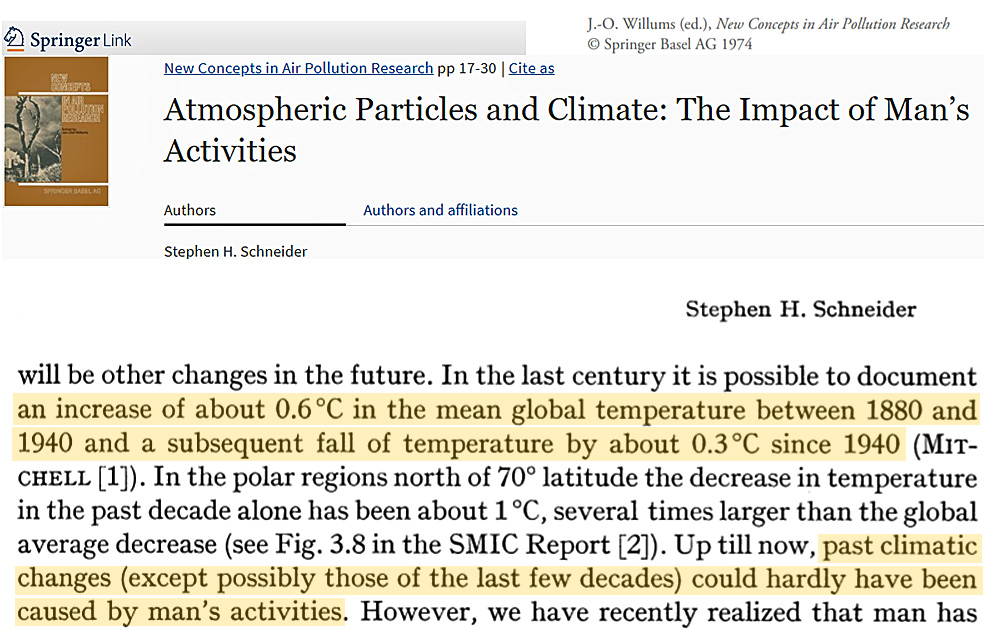 By 1975 Schneider had published a book, The Genesis Strategy, that focused on the creation of human impacts on climate. He reiterated contemporary concerns about the ongoing global cooling and that cooling leads to more extreme weather, droughts, floods, crop failures… 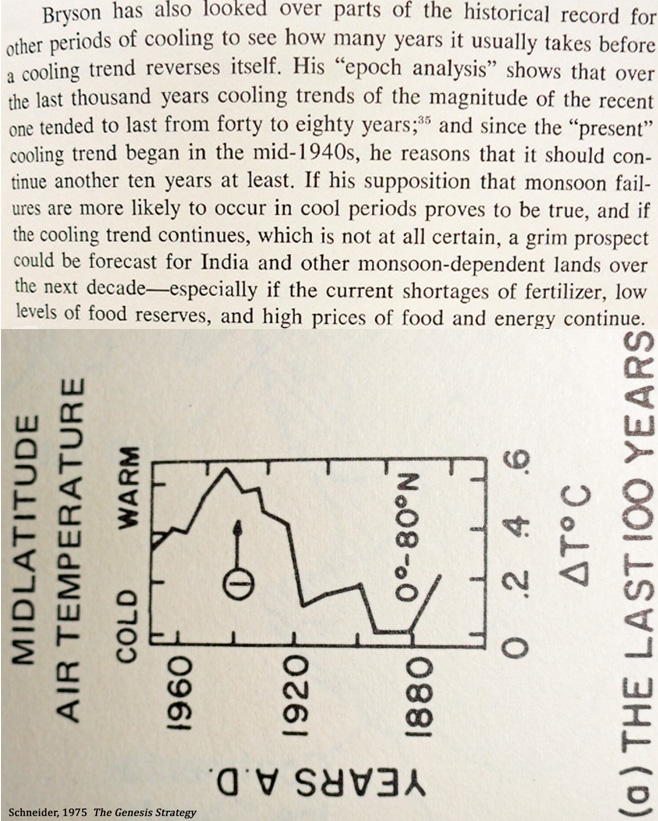 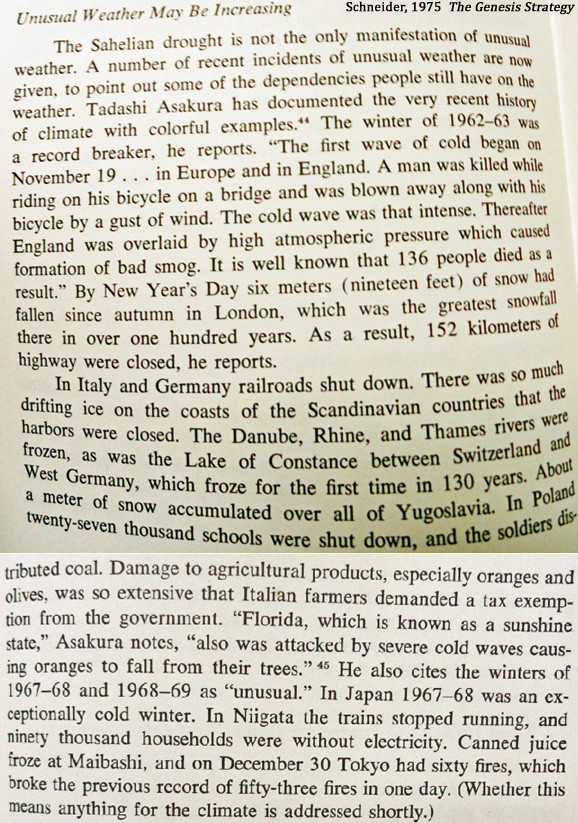 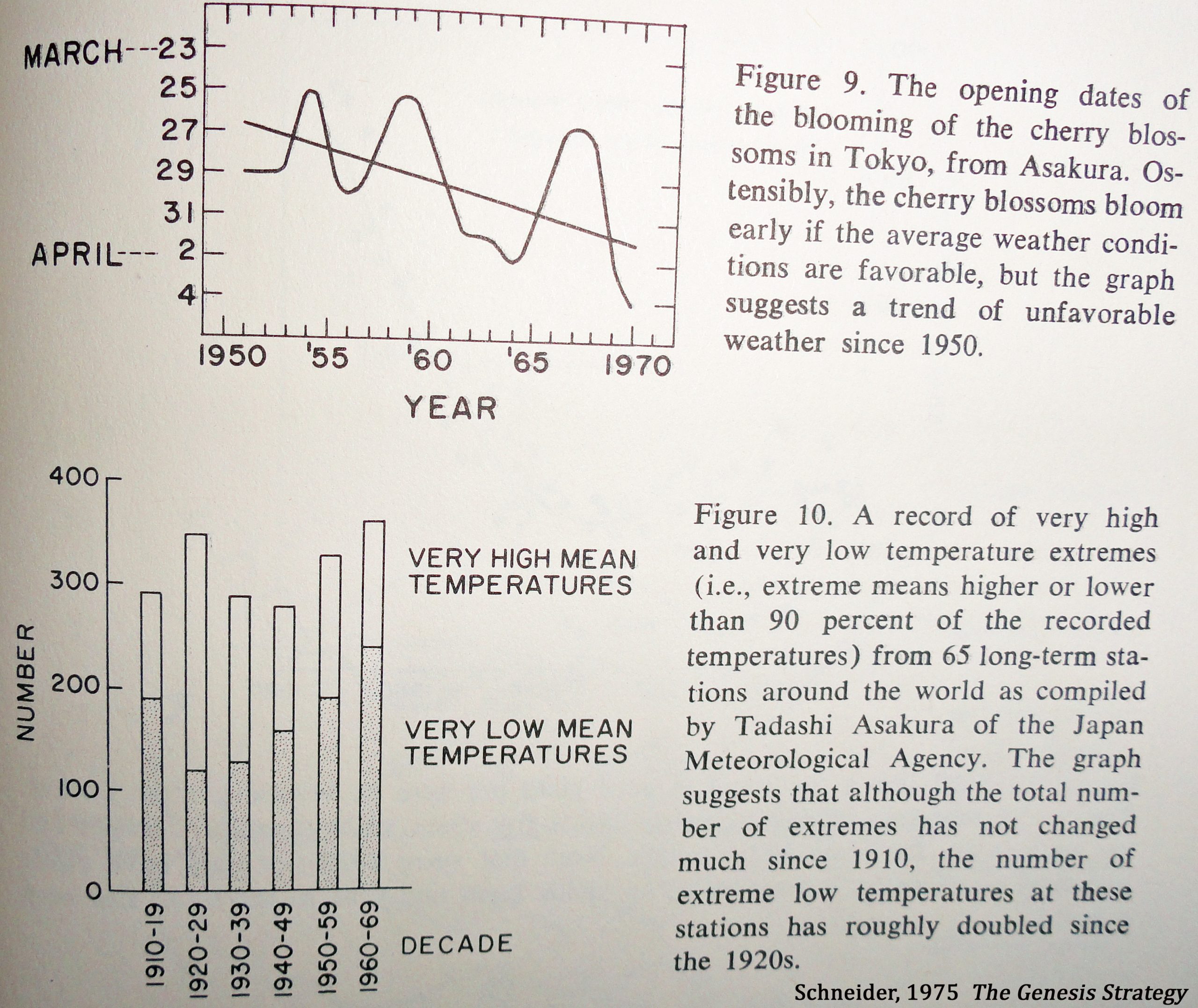 There were many climate modification proposals of the mid-1970s that conventional wisdom suggested would “offset an inadvertent climate change” and “stabilize the climate.” Purposely changing the climate by “creating a stratospheric dust layer” in space, “cutting down tropical forests,” diverting rivers and damming the Gulf stream, and even “creating surface temperature anomalies” could all potentially “relieve” the Earth of droughts, floods, and “gloomy long-range weather forecasts.”

One of the more prominent climate modification proposals was to “eliminate the Arctic Ocean ice pack” by “spreading black particles such as soot by aircraft” over the top of it. It was surmised that decreasing the reflectivity of a large area of the ice “would cause it to disappear in a period of about three years.” It was estimated that 10 million metric tons of soot would be needed to sufficiently blacken the ice; it would take about 500 aircraft 50 days to complete the job.

Another suggestion was to “dam the Bering Strait and pump water from the Arctic Ocean into the Pacific, thereby drawing warm Atlantic water in from the other side and raising the surface temperature enough to melt the ice pack.”

A third method proposed detonating “thermo-nuclear devices” in the middle of the Arctic Ocean to “fragment the ice.” 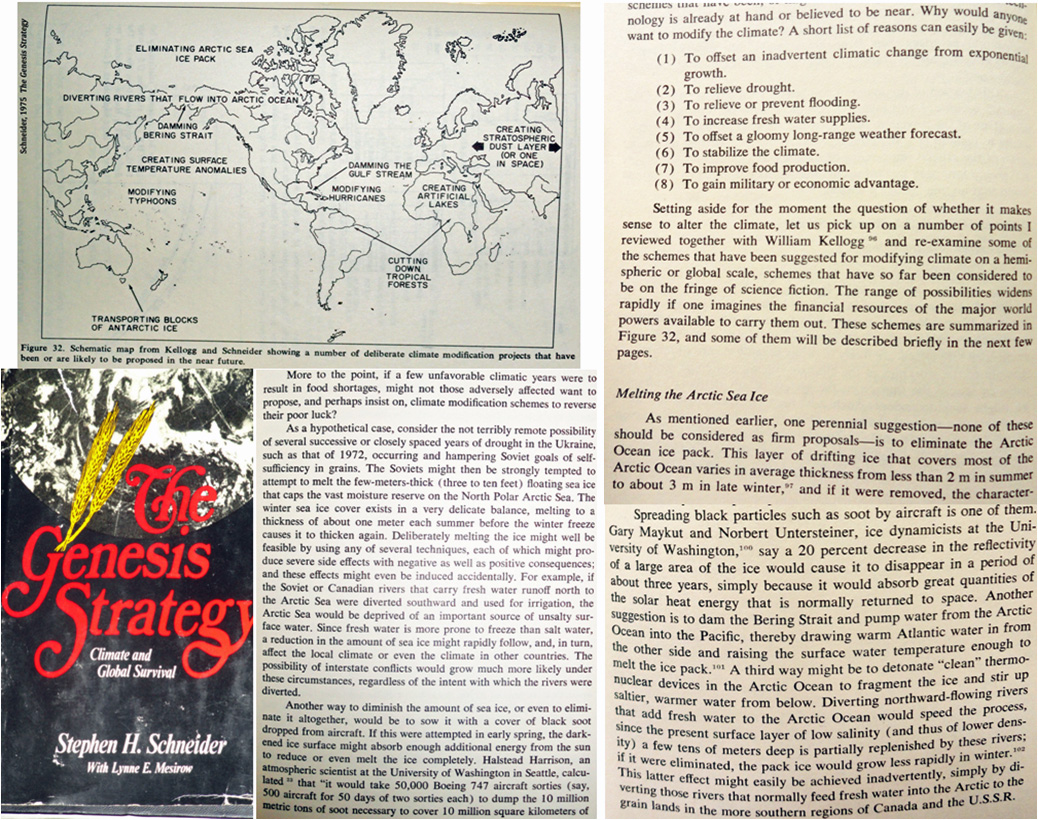 In 1989 Schneider gave Discover magazine an interview (Jankovic and Schultz, 2017) in which he said climate scientists must choose between telling the truth and being effective in “working to reduce the risk of potentially disastrous climate change.” The latter choice necessitates capturing the public’s imagination by offering up “scary scenarios” and making “simplified dramatic statements” while avoiding mention of “any doubts we might have.”

This climate-scientist-as-political-activist proposal has been the clarion call for what anthropogenic global warming activism has become today. 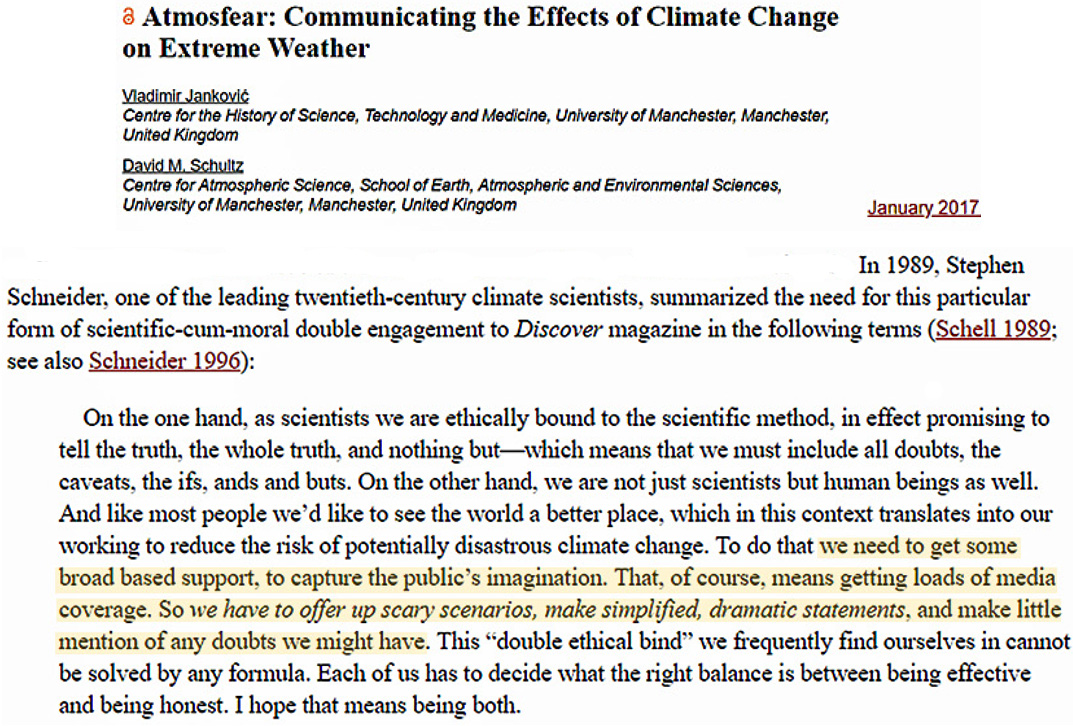