Outrage over YouTube censor of Corona and government-critical videos made by dozens of leading German actors.

“YouTube is no Truth Commission”…court rules against social media giant. 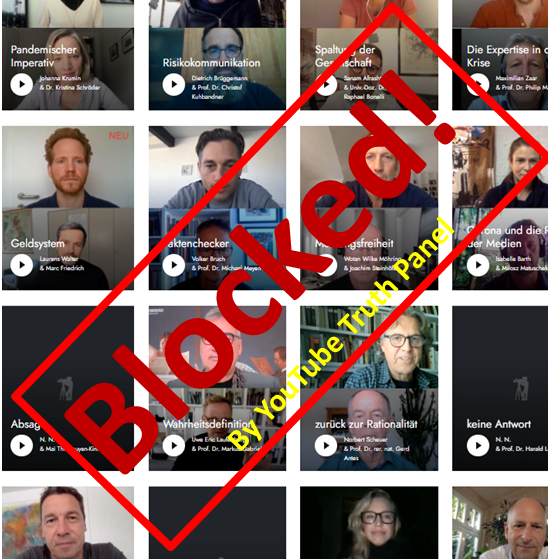 Dozens of prominent German actors have banded together as part of the “allesaufdentisch” (everything on the table) freedom of expression campaign to demand a more open discussion on the Corona virus and the controversial government policies, rules and regulations. Their statements were posted in the form of short videos on YouTube.

In the recent months, views critical of government Corona policies and vaccines have been suppressed by the major media.

At their allesaufdentisch site, the group of leading actors, performers, artists state: “We are watching the development of political action in the Corona crisis with increasing concern. Many experts have not yet been heard in the public Corona debate. We would like to see a wide-ranging, fact-based, open and factual discourse and also an equally wide-ranging discussion of the videos.”

Not surprisingly, YouTube has since moved and taken down some of the videos, citing totally vague reasons such as “violating community guidelines.”

According to the Bild journalist Filipp Piatov, three of the “allesaufdentisch” videos had been removed by YouTube. This immediately sparked an outcry on overzealous limits on freedom of expression.

On why YouTube blocked the videos, Piatov comments the reasons provided by YouTube were “totally abstract” and “vague”: “I asked YouTube yesterday, and asked them for clarity and what is concretely the violation. And so far there’s been no reply,” said Piatov. “The artists don’t know why these videos were removed. We’re talking about them being bluntly silenced.”

The group of actors and actresses have hired high profile Hamburg attorney Joachim Steinhoefel, who tweeted his reaction to YouTube’s removal of the film and failing to cite specific reasons for the move. In his tweet, Steinhöfel calls YouTube’s move “the sad opposite” of democracy and that he sees “a new dimension of legal violation by YouTube”.

What’s especially upsetting is that some of the videos taken down were interviews with leading experts, who legitimately pointed out recent, gross errors made by the government institutes. “Harmless videos that were simply deleted,” Bild’s Piatov notes.

When asked if the videos indeed contained controversial content justifying removal, Piatov said there was none, adding “A false fact is not reason for a deletion.” Otherwise, many video statements made by government authorities would need to be taken down as well.

“YouTube is not a factchecking platform, not a Truth Commission that gets to decide what’s right and what’s wrong,” said Piatov. “Who is YouTube? Is it a University? Is it a panel of virologists who sit and watch all these videos and say this one, from the 100 million that got uploaded, we’re going to delete?”

The latest reports is that prominent Hamburg Internet media attorney Joachim Steinhoefel, representing the group of actors, has since convinced a German court to order YouTube to reinstate the removed videos. More on that tomorrow.