By the end of 2022, the government will have shut down another 6 plants with a total (baseload) capacity of 8.54 gigawatts! 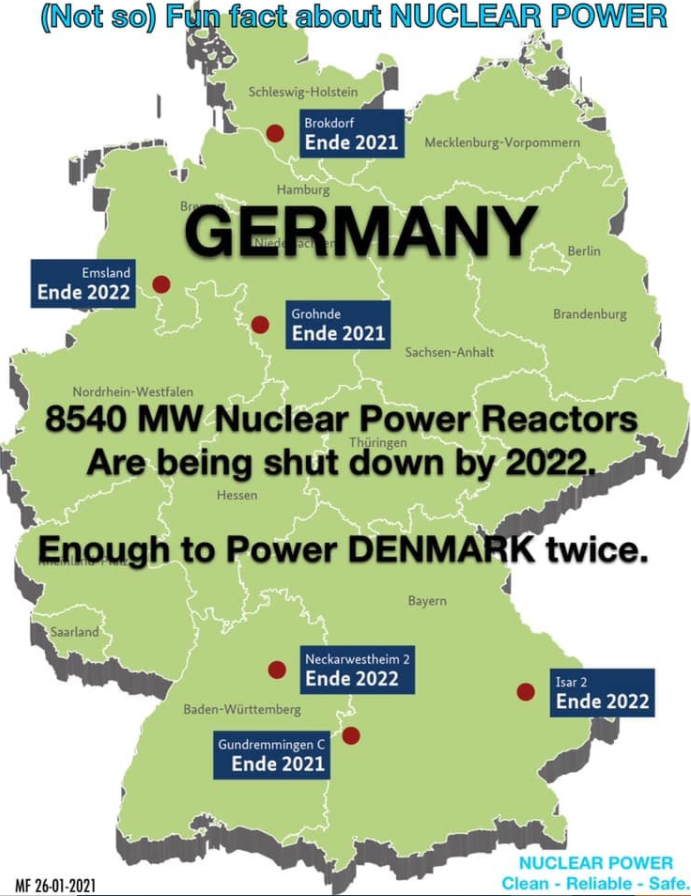 Yesterday we commented here that Germany will in fact be shutting down all the baseload power sources, which ironically kept the country from blacking out in 2021 because wind and solar power failed to deliver as expected.

In just over a month, Germany will close 3 of its newest and best nuclear power plants and more than 4050 MW of electricity will disappear from northern Europe’s power grid. 4050 MW is equivalent to the average electricity consumption of all of Denmark.

It will put supply security further under pressure and them choosing to do so in the middle of winter is pretty crazy.
Not only will the 4050 MW of shut off nuclear power lead to more CO2 emissions, but it will cause much more pollution from the burning of biomass and fossil fuels. Next winter, Germany will close the last 3 nuclear power plants, also 4000 MW.

Anyone who has followed the energy and climate political debate, even superficially, over the last 10-20 years can see that Germany, Denmark and other ‘green crazy countries’ are doing it vigorously AGAINST what logic and science dictates.

We see a slow disaster playing out with The Greens in the lead role as the crazy villain, hell-bent in their eagerness to wipe out life and prosperity.

25 responses to ““Slow Disaster Playing Out” As Germany Moves To Shut Down 8.5 GW Of Baseload Nuclear Capacity”