Silencing the alarm: After barely beating sea ice the lows recorded in 1993, 1997 and 2017, German scientists say Antarctic record low of 2022 statistically has “no particular relevance”.

The most recent and outstanding German language Klimaschau video evaluates the Antarctic sea ice trend over the satellite measurement period, i.e. since 1978. Two press releases from renowned institutes presented are really worth mentioning.

Earlier this year, Antarctic sea ice dipped to a record low for the satellite period, after having seen an overall rise over the 40 year period. Some media outlets seized on the record low as evidence of a warming planet (after having been silent for decades). 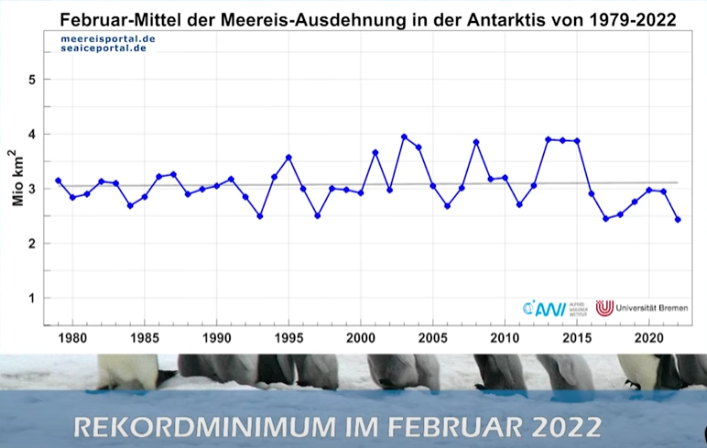 Since 1978, the February minimum has fluctuated about the 3 million square kilometer mark before dipping to the new record low earlier this year, barely beating the lows recorded in 1993, 1997 and 2017. Note how the 2000s saw record highs. So what has happened since 2015?

A number of researchers point to natural oceanic and atmospheric cycles as the cause behind the recent drop.

Others report that the record low is of no statistical significance. For example, the meereisportal.de/seaiceportel.de — operated by the Helmholtz Climate Initiative, the Alfred Wegener Institute and the University of Bremen — reports:

It is well established that there is a pronounced variability – on a decadal and even centennial scale – in the oceanic and atmospheric conditions that influence the Antarctic sea ice (Latif et al., 2013). Consequently, this individual record value has no particular relevance in a statistical sense.”

So far, there are absolutely no evident signs of any danger pertaining to Antarctic sea ice loss over the coming years. The Alfred Wegener Institute, for example wrote in a press release earlier this year:

‘We used a broad range of configurations for our simulations. In the process, it became clear that only those simulations with a high-resolution description of the Southern Ocean encircling the Antarctic produced delayed sea-ice loss similar to what we are seeing in reality,’ says Rackow. ‘When we then extended the model into the future, even under a highly unfavourable greenhouse-gas scenario the Antarctic sea-ice cover remains largely stable until mid-century.’ “

The AWI press release also admits that presently the climate models still are not capable of reliably simulating the Antarctic:

‘Our study supports the hypothesis that climate models and projections of the Antarctic sea ice will be far more reliable as soon as they are capable of realistically simulating a high-resolution ocean, complete with eddies,’ says Rackow.”

Summary: it’s going to take a lot more years and reams of data before we get an idea of what’s really going on at the South Pole.