Wrangel Island reindeer numbers plummeted from 8,500 to 400-500 individuals within 5 years (2002-2007) due to repeated cold weather-related icing episodes resulting in starvation.

The alarmist activists who routinely claim the Arctic biosphere is threatened by a warmer climate seem to ignore the Arctic’s mass die-off catastrophes linked to cold temperatures and ice in recent decades.

Per a side note in a new study (Babiy et al., 2022) reporting on a 2019 Wrangel Island brown bear siting, there are 8 mammalian fauna living on this island today. Only a few of them are long-time residents: lemmings, arctic foxes, and polar bears. Wolves, musk-oxen, and reindeer were added to the island (by conservationists) within the last century. The sea ice surrounding the Wrangel Island connects these species to the mainland.

Reindeer were introduced to the island in 1950. However, a great reindeer die-off has been ongoing in the 21st century due to icing events in winter depriving the reindeer of access to food. 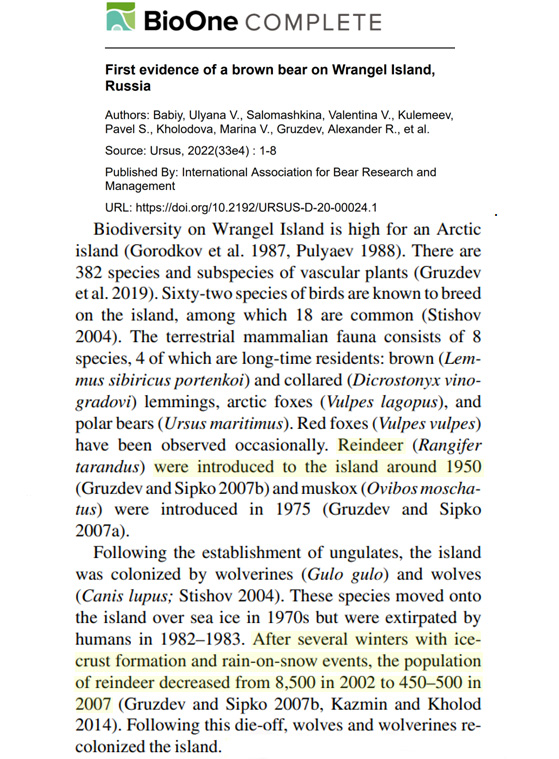 Great die-offs are actually quite common on Wrangel Island and other nearby Arctic sites. But the mass deaths are not due to climate warming. The opposite, actually.

Winter in the Arctic is excruciatingly cold and food is scarce due to excessive ice coverage. Nearly all deaths occur during these colder months. For example, the icing of the snowpack in the winter of 2003 led to 20,000 musk-oxen deaths on Banks Island (Arppe et al., 2019).

A few thousand years ago, when the Arctic was much warmer than it is today, grazing megafauna like the wooly mammoth could eat grass year-round on Wrangel Island. Today’s Arctic climate is too cold for grass production at these sites. The last wooly mammoths on Earth disappeared about 4,000 years ago due to this lack of access to warmth and food. 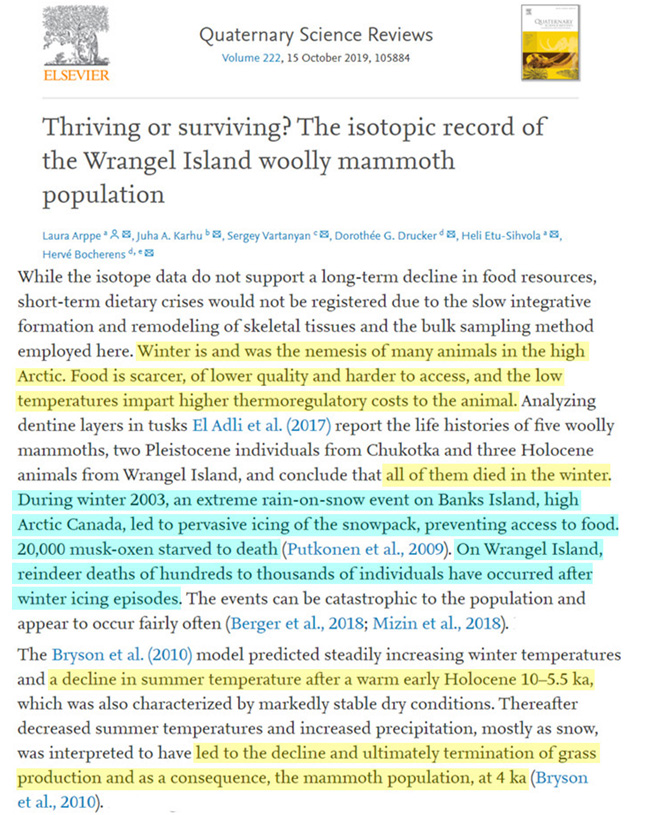 Contrary to popularized claims, warmth is a boon to the Arctic biosphere. Cold temperatures are a nemesis to survival.