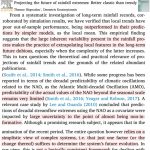 Share this…FacebookTwitterScientists continue to document severe discrepancies between climate modeling and observations in newly published scientific papers. 1. Models run too hot and yield “unrealistically high” estimates of the climate’s sensitivity to CO2 forcing. McKitrick and Christy, 2020 “All model runs warmed faster than observations in the lower troposphere and midtroposphere, in the tropics, and […]

Share this…FacebookTwitterBy Erich Schaffer Magic is all about illusion, and so is “climate science”. Nothing about the GHE is as it seems and so far the “critical” side has failed to see through it. No longer! Examining the key question of surface emissivity, usually downplayed as a non-issue, reveals highly significant insights relativizing the common […]

Share this…FacebookTwitterA new assumption about carbon budgets reveals climate scientists have been vastly underestimating (by a factor of 2) the amount of carbon absorbed by the ocean for decades. Every past carbon budget estimate has been twice as wrong as the current estimate. When it comes to the ocean heat fluxes and source vs. sink […]

Share this…FacebookTwitterIn an interview with flagship daily Frankfurter Allgemeine Zeitung (FAZ here), Max-Planck Institute for Meteorology (MPIM) Director Dr. Jochen Marotzke said predicting how many degrees of warming we need to prepare for was like reading tea leaves and that he is not worried about “climate tipping points”.  He also spoke of the wide disagreement […]

Share this…FacebookTwitter Image: NASA (public domain) By Die kalte Sonne Do you remember the wild story that cold winters in Central Europe are supposedly a consequence of the Arctic turbo-heating? A great sideshow hypothesis in those years when winters were suddenly colder than expected. A study by Dai & Song 2020 has now brought the idea […]

Share this…FacebookTwitterNowadays as soon as there’s any hint of some heat in the forecast, the European press immediately jump to holler a “record hot” summer is in the pipeline. Brace yourselves! A total miss For example, just last week The Weather Channel Germany warned of 40°C temperatures for Germany, probably after some model results sniffed […] 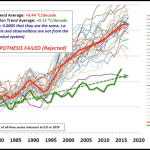 Share this…FacebookTwitterStefan Rahmstorf on the IPCC modelling breakdown: Reason to breathe a sigh of relief, new climate models are far too sensitive. By Die kalte Sonne (Translated by P. Gosselin) DER SPIEGEL provides a regular platform for the controversial climate scientist Stefan Rahmstorf. On 12 May 2020 he was allowed to: Stronger temperature rise: Why […]