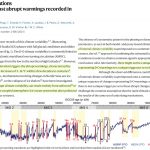 Share this… Facebook TwitterA new study asserts that when Greenland naturally warms by multiple degrees per decade, this “abrupt climate variability can result entirely from unforced or noise-induced oscillations of the coupled atmosphere-ice-ocean system.” This means the recent modest climate changes for Greenland may easily fall within the scope of an unforced natural variability pattern. […] 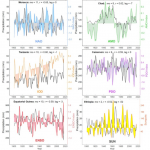 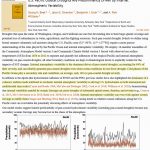 New Study: Drought In Western US Is 84% Driven By Internal Variability And 16% By Ocean Cooling

Share this… Facebook TwitterAn assessment of the 1856-2012 drought frequency/intensity along the US West Coast leaves no role for human activity in hydroclimate. Across the globe, no clear precipitation trends have been observed in the last several decades (Nguyen et al., 2018) Image Source: Nguyen et al., 2018 Instead of an intensification of the hydrological […] 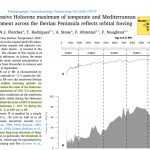 Share this… Facebook TwitterScientists are increasingly finding that abrupt, decadal-scale temperature changes of multiple degrees Celsius can arise unforced and spontaneously. The surface temperatures for the Greenland ice sheet have been known to warm 8 to 16°C “within decades or less” – yes,  fewer than 10 years – due to “unforced oscillations.” In other words, […]

Share this… Facebook TwitterThe forcing uncertainties and lack of observational measurements in the top-to-bottom global ocean preclude an assessment that modern warmth is due to anthropogenic activities. Key points from a new paper (Gebbie, 2021): • 93% of the changes to the Earth’s energy budget, manifested as warming of the Earth system, are expressed in […]

Share this… Facebook TwitterA new assumption about carbon budgets reveals climate scientists have been vastly underestimating (by a factor of 2) the amount of carbon absorbed by the ocean for decades. Every past carbon budget estimate has been twice as wrong as the current estimate. When it comes to the ocean heat fluxes and source […]

Share this… Facebook TwitterIt is claimed Earth’s surface has warmed by 1°C in the last 140 years – which is a supposedly rapid climate change. But a new study suggests the Northern Hemisphere surface naturally cooled by 1°C in 8 or 9 years, then warmed up again by 1°C within decades during the Late Antique […] 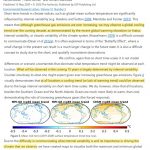 Share this… Facebook Twitter A new study documents the dominance of internal variability in decadal-scale global temperature changes and suggests we may experience a global cooling trend during the next 15 or even 30 years despite rising greenhouse gases. Maher et al. (2020) acknowledge that internal variability in global surface temperature variations is “a difficult […]