Share this…FacebookTwitterHe looks more like a guru, even a prophet. In Switzerland 73 year old Swiss Alps mountain guide Werner Munter is known as the “avalanche pope”. No one knows more about avalanches in the Alps and their risks than he does. Werner Munter: Image credit: www.berge-im-kopf.ch. Having authored some 20 books, he is credited for […]

Share this…FacebookTwitterThis past weekend I wrote two posts about a recent two-part German ZDF Television documentary on climate change and its impact on the development of human history: here and here. Image Mark Maslin, cropped from ZDF At the very end of Part 2, the otherwise excellent German public television documentary abruptly descends into sheer lunacy in […]

Share this…FacebookTwitterYesterday I posted on Part 1 of German ZDF television’s Terra-X series two-part documentary on climate and human history appearing on January 11  and 18. Part 1 covered the world’s climatic changes that occurred during the last ice age and up to the time of the Roman Empire. Part 1 clearly showed that the earth’s […] 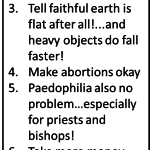 Share this…FacebookTwitterAwhile back I announced I was disassociating myself from the Catholic Church because of their growing acceptance of the wacky man-made global warming theory. How can it be that the Church, symbol of truth and morality, would accept a science that is built on outright lies, flakey theories, deception and fortunetelling? That’s no Church for me. […]

Share this…FacebookTwitterThe online Swiss Handelszeitung (Trade News) reports on the world’s second largest reinsurer Swiss Re, and on the losses from natural catastrophes for 2014. Let’s recall that natural catastrophes are supposedly becoming more and more frequent due to the alleged man-made climate worsening from manmade CO2 emissions. Hat-tip: Kurt However the Handelszeitung writes that […]

Share this…FacebookTwitterNot only do the hysterical global warming bedwetters want us to do it with the lights off in unheated room with all our clothes on, now they are poised to request senior citizens to leave their cars in the garage and get around in the rain and snow by foot with their Rollators. Hat-tip: […]

EIKE: IPCC Synthesis Report “In Crass Contradiction To Almost Every Measurement And Trend In Nature”

Share this…FacebookTwitterToday parts of the German mainstream media have begun reporting on the 9th Extreme Weather Conference in Hamburg, which began today and is slated to end on Friday. The direct link to the program-pdf here. Of course the focus of the Congress will be on the claimed “increasing frequency of extreme weather events”. In […]

Share this…FacebookTwitterThis story is a perfect illustration of how today’s journalists will print anything they told by swindling climate scientists. ========================================== Bremen’s Weser Kurier daily is very sure: “Climate change is damaging organs” By Sebastian Lüning and Fritz Vahrenholt (Translated, edited by P Gosselin) The newspaper of the German port city of Bremen, the Weser […] 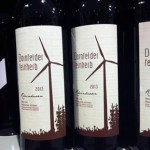 Share this…FacebookTwitterJust a couple of anecdotes today to illustrate how wacky the climate-change religion is getting. First is a short blurb appearing at the online Linux Magazine bearing the title: “Mobile phones are climate killers“. This is for real. Using your mobile phone and sending text messages apparently is contributing to bad weather and the death […]

Share this…FacebookTwitterWe keep hearing from alarmists that storms are becoming more violent and more frequent, and thus storm damage and deaths are rising – all because of man-made global WARMING. Unless we stop driving SUV’s, mankind in the future will be wiped out by global warming-precipitated bad weather. Hat-tip: DirkH. However, the world’s largest re-insurer […]

Share this…FacebookTwitterIf you do an Internet search of “climate liability insurance“, you will quickly find that it is one of the latest schemes being promoted by insurance companies, banking and even fossil fuel companies to curb “dangerous climate change”. Here they stand to make huge piles of cash by claiming CO2 is causing bad weather. It’s the latest […]