Pause In CO2’s Influence On Temperature

However, according to a new Nature paper entitled “A Hiatus of the Greenhouse Effect” by Song, Wang, & Tang (2016), there has been an overall hiatus to slight decline in the influence of the greenhouse warming effect on temperature beginning in 1992, which has coincided with the well-established pause in global warming since the early 2000s.

The encapsulating graph from the paper is depicted above, illustrating that the global-scale atmospheric and surface greenhouse effect (Gaa and Gsa) has remained flat or slightly declined between 1992 and 2014, during the same period time that anthropogenic CO2 emissions were rapidly rising.

This strongly suggests that anthropogenic CO2 emissions retain a very modest role in affecting variations in the overall greenhouse effect.

A Hiatus of the Greenhouse Effect

[T]he primary goal of this study is to investigate the spatiotemporal evolution of the greenhouse effect to better evaluate its potential impact.

[A]remarkably decreasing Gaa trend (−0.27 W m−2 yr−1) exists over the central tropical Pacific, indicating a weakened atmospheric greenhouse effect in this area, which largely offsets the warming effect in the aforementioned surrounding regions. As a result, a trendless global averaged Gaa [atmospheric greenhouse effect]   is displayed between 1991 and 2002 (Fig. 2).

Again, no significant trend of the global averaged Gaa [atmospheric greenhouse effect] is found from 2003 to 2014 (Fig. 2) because the enhanced warming effect over the western tropical Pacific is largely counteracted by the weakened warming influence on the central tropical Pacific.

As scientists Song, Tang, & Wang (2016) point out, during the 2003 to 2014 period, global temperatures “stop rising”.  In fact, temperatures declined slightly during this period according to HadCRUT and RSS. 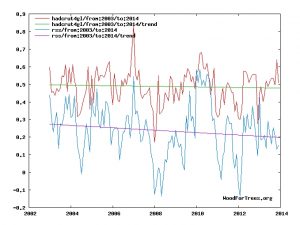 Song, Wang, & Tang ultimately provide an explanation for the hiatus in the global-scale greenhouse effect (from the early 1990s to present) and temperature rise (from the early 2000s to present).  They insinuate that water vapor and clouds are the dominant contributors to greenhouse warming, and the CO2 contribution is quite modest by comparison.  Small variations in water vapor and cloud can therefore supersede large variations in CO2 in determining trends in the overall greenhouse effect.  Below are the key points from the rest of the paper detailing CO2’s small contribution to the overall greenhouse effect (relative to water vapor, clouds).

The results above indicate that the notably downward Gaa tendency over the central tropical Pacific indeed plays an important role in inducing the greenhouse effect hiatus since the 1990s. What causes this decreasing Gaa [atmospheric greenhouse effect]? The variation of the greenhouse effect is substantially influenced by its contributors, including water vapor, clouds, and GHGs. GHG concentrations have risen steadily during recent decades. The variations of metrics related to the other two contributors are given in Fig. 4a and are based on the CERES-EBAF products between 2003 and 2014. The total column precipitable water (TCPW) anomaly significantly increases at a rate of 0.44 cm yr−1. However, the cloud area fraction (CAF) anomaly is reduced by −0.60% yr−1, which is consistent with the decreasing cloud activity described in previous publications. Therefore, although the greenhouse effect can be enhanced by increasing GHGs and water vapor in the atmosphere, it can be weakened by decreasing clouds. If these two actions offset each other, a hiatus of the global greenhouse effect will result.

[T]his pause in the greenhouse effect is mostly caused by the high number of La Niña events between 1991 and 2014. A strong La Niña indicates suppressed convection in the tropical central Pacific that reduces atmospheric water vapor content and cloud volume.

In conclusion, the pause of the greenhouse effect since the 1990s may be one of the reasons for the global warming hiatus starting in the early 2000s.

The explanation that water vapor and clouds are the most dominant contributors to the overall greenhouse effect — and that the CO2 contribution is insignificant by comparison — has been well known and documented in the scientific literature for decades.  For example:

“[T]he measured increase in carbon dioxide in the atmosphere, according to the most recent computations, would not be enough to have any measurable climatic effect. Rasool and Schneider (1971) conclude that an increase in the carbon dioxide content of eight times the present level would produce an increase in surface temperature of less than 2°C, and that if the concentration were to increase from the present level of 320 parts per million to about 400 by the year 2000, the predicted increase in surface global temperature would be about 0.1°C.”

“Water vapour and cloud are the dominant regulators of the radiative heating of the planet. … The greenhouse effect of clouds may be larger than that resulting from a hundredfold increase in the CO2 concentration of the atmosphere. … The size of the observed net cloud forcing is about four times as large as the expected value of radiative forcing from a doubling of CO2. The shortwave and longwave components of cloud forcing are about ten times as large as those for a CO2 doubling.”

“It is widely assumed that variations in Earth’s radiative energy budget at large time and space scales are small. We present new evidence from a compilation of over two decades of accurate satellite data that the top-of-atmosphere (TOA) tropical radiative energy budget is much more dynamic and variable than previously thought. Results indicate that the radiation budget changes are caused by changes in tropical mean cloudiness. The results of several current climate model simulations fail to predict this large observed variation in tropical energy budget. The missing variability in the models highlights the critical need to improve cloud modeling in the tropics so that prediction of tropical climate on interannual and decadal time scales can be improved.”

Summarizing Question:  Why is there so much preoccupation with atmospheric CO2 concentrations and reducing anthropogenic CO2 emissions when it is well documented in the peer-reviewed scientific literature that the CO2 contribution to the overall greenhouse effect is so weak that it can be easily supplanted by small changes in clouds and water vapor, or natural climate-changing constituents?