Share this… Facebook TwitterThey all admit the IPCC is flawed and in need of an overhaul, yet they still insist the science is correct. Go figure. That’s pure rubbish, of course. Bad process = bad product. It sounds just like the National Academy of Sciences reaching the conclusion that Michael Mann’s hockey stick science had no […]

Share this… Facebook TwitterEuropean particle physics research center CERN located near Geneva, Switzerland has gotten its budget cut by 6% over the next five years. Europe no longer has the money to fund it. It was just a question of time. With so much money being pissed away on bogus climate research and save-the-world projects, […]

Phytoplankton Are Not Starving (Correction) 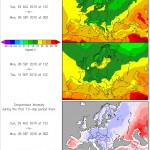 Share this… Facebook TwitterSnow already! A cold blast of polar air has moved over central Europe, pushíng temperatures far below normal. Snow is forecast in the Alps at elevations as low as 1400 meters. The following chart shows the forecast for the next 2 weeks. It shows that summer is finished for much of Europe. […]

Rules For Enviro-Radicals: Pick The Landscape, Mechanize It, Desecrate It

Share this… Facebook TwitterH/T EIKE The folly of windfarms and solar panels knows no boundaries. For example nowhere today in the north German area where I live is it possible to drive or take my bike 10 minutes anywhere without seeing a cluster of white behemoths chopping through the landscape (and birds). Photo source: www.greenpeace.org. […]

Glaciers – The Dark Side. It’s Not the CO2 Carbon

Share this… Facebook TwitterEd Caryl has become a regular contributor here, and today he presents insights on the causes of glacial melt. Here he discusses how absorption of solar energy by soot and Black Carbon contribute significantly to glacial melting and that CO2 is a minor factor.   Glaciers – The Dark Side. It’s Not […]

Share this… Facebook TwitterThe German Freie Welt has a short piece by Fabian Heintel called Lost in Translation. It takes a look at how the sceptical International Climate Science Coalition gets treated by Wikipedia. The English Wikipedia describes the organisation as:  …an international association of scientists, economists and energy and policy experts That sounds respectable and authoritative […]

Share this… Facebook TwitterRussian Prime Minister Vladimir Putin arrived Monday on Samoilovsky Island in the western Siberian Arctic to visit a joint Russian-German scientific expedition, Lena-2010. Lena 2010 is conducting studies on the Russian Arctic permafrost, which is 1.5 km thick at the Samoilovsky Island location and estimated to be 40,000 years old. The German page […]

Major Media Too Lazy To Check Sources: Outdated Observations Passed On As “News”

Share this… Facebook TwitterIt appears that major media outlets took reports based on old observations and passed it on to the public as breaking news last week. H/T: Reader Dirk H. Last week a number of major media outlets reported on how a large plume of oil had been spotted in the Gulf of Mexico, […] 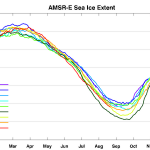 Share this… Facebook TwitterThe blogosphere is now filled wth Arctic sea ice projections and opinions, and why not? It’s a game that adds fun to the science. For example Steve Goddard at WUWT projects 2010 will finish above 5.5 million sq km. My forecast remains unchanged. 5.5 million, finishing above 2009 and below 2006. Same as […]

Share this… Facebook TwitterIn my last post I wrote about China’s aggressive, yet legitimate, expansion of its energy supply. I wonder what the western climate hand-wringers think about the following graphic? Will they ask China about this in Cancun? My bet is that they’re going to ignore it and focus instead on USA’s and Europe’s emissions. […]

Posted in CO2 and GHG | 2 Responses