German Professor, Leading Critic Of COVID Policies, Gets Picked Out By Hanover Police For Walking! 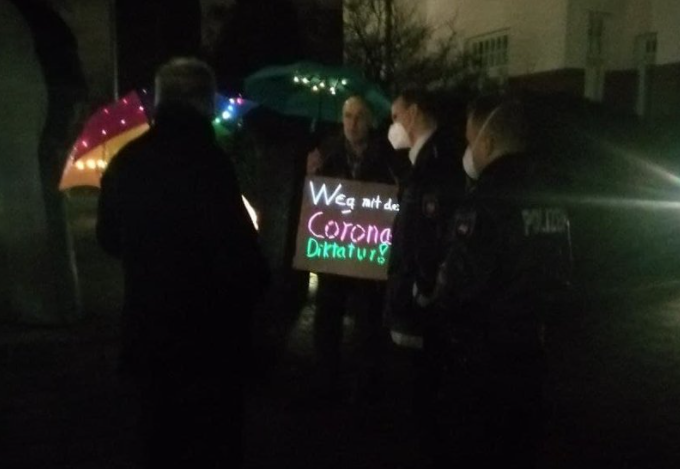 As Germany scrambles to stifle the growing grassroots movement against COVID restrictions and vaccine mandates, authorities are resorting to ever more extreme tactics to snuff out the people’s right to dissent.

Detained, charged and barred – for going for a walk …out of control authorities

[Hanover] Yesterday, the Monday after New Year’s Day, 2022, I wanted to watch for the first time one of the “walks” now taking place by the thousands all over Germany as the authorities have banned demonstrations.

I know from the newspaper that the police have issued a general order on FFP2 masks to make it easier to take tougher action against walkers. The medical bogus arguments are no longer used, so I put a mask in my pocket.

At the Town Hall, the designated meeting place, I can only see a huge police contingent. I stroll alone to the state parliament, where a large group of people are being detained and requested to assign a leader of the meeting. I stay away from that and continue to Hanover’s Kröpcke central square, where on this mild January evening several hundred people can be found, most of them on their way to or from the shops.

Keeping an eye out for possible walkers, I stop for a moment and a lady standing next to me abruptly says she hasn’t been downtown for ages because of lockdowns and masks. As I feel the same way, we admire the Christmas decorations together for half a minute. As I want to move on, there are suddenly five police officers in front of us and, as I turn around, about ten to fifteen behind us, forming a ring around the lady, myself and maybe eight other, mostly older people. Asked what this means, a blonde policewoman answers me that she hereby declares us an [illegal] assembly. I immediately put on my FFP2 mask, am honestly shocked and reply that this is probably a civic prank. As a result of the police presence and the crowd that has formed, there are now many spectators in the square, and basically any group of people could be surrounded from behind and declared an “assembly”.

An acquaintance who happens to be passing by wants to join me, but she is not allowed into police-surrounded group, and I am not allowed out. More and more police officers arrive, also spectators, and the whole scene is getting filmed many times over. I also receive shouts from people who recognize me and express their surprise at this strange measure. The term “fascism” gets used, and the police officers are verbally attacked harshly by the bystanders.

After about a quarter of an hour, things get serious: I am taken away by three men, and when I ask what I am accused of, I get the answer: violation of the obligation to wear a mask. I reply that I am wearing one, even FFP2, and have been since the group formed. But it is of no use: I should have been wearing the mask before the group formed, and that they have photos to prove that this was not the case.

Now that I am away from the others, I only notice out of the corner of my eye that the others who are not wearing masks are far worse off. Maybe because they just wanted to walk through the city and for that reason didn’t have one with them. In any case, I hear commotion and screams, but as a detained person I cannot investigate. After taking my personal details, the police tell me that proceedings will be taken against me and that I am banished from the entire city center. Yet, the police officer in charge is unable to define the boundaries of the area. Instead, he threatens me with imprisonment in case of a violation.

Firstly, the police can, through underhanded singling out, pin a case on anyone who is outside their home, and that is probably the point of the action. Secondly, if this cannot be called fascism, where does it actually begin – or to put it another way, what more do we actually want to put up with?

Dr Stefan Homburg is a retired university professor of public finance at Leibniz University in Hanover, Germany, and has advised numerous governments, politicians and parliaments and provides information on the Corona crisis at twitter.com/SHomburg.