Share this… Facebook TwitterI’m wrong with my last post. There is some climate material in those Wikileaks documents. I started sifting through and found this one. Nothing earth-shattering, but you see the deals being done behind the scenes. May 8, 2009 Here we see China was never going to accept any targets on CO2 emissions. […]

Wikileaks – Are Climate Documents Getting Buried?

Share this… Facebook TwitterI’ve been keeping an eye on the Wikileaks disclosure of classified documents, which has deeply embarrassed a wide collection world political leaders, and particularly the US government in general. I was hoping that among all of these confidential documents, some would be protocols, messages or reports on discussions on climate policy. So I […]

FOCUS: “Many Of The Widespread Horror Scenarios Are Baseless”

Share this… Facebook TwitterYesterday I wrote about the latest issue of FOCUS news magazine HERE. I just picked up the new issue, out today, and read it. It’s an unmistakable departure from usual doom and catastropheism, which had generated so much of the fear and urgency needed to justify the rush to reckless policy making and profiteering. FOCUS shows that […]

Focus Magazine: “Global Warming Is Good For Us”

Predicting The European Climate From The CET Record – Lesson Learned

Share this… Facebook TwitterWe were told that the mild winters we experienced in Europe were due to global warming. Now, suddenly, we are getting hit with yet another nasty cold winter. Why? Guest writer Juraj Vanovcan presents his observations and interesting evidence that it has nothing to do with CO2. He presents what I think […]

Share this… Facebook TwitterNot only Europe is getting walloped by winter, so are some regions in China, where the most snow has fallen in 30 years. The early snowstorms have isolated herdsman living in remote areas, see map, and Chinese relief services dispatched assistance. According to China.org.cn: Snow storms has hit four towns in Xing’an Prefecture, […]

Share this… Facebook TwitterThe Climate-Berlin Wall surrounding Germany has been cracking for some time now, and crumbling with increasing speed. Die Zeit’s online smear The Abetters of Doubt takes aim at the skeptics, who have scaled the Wall and are exercising their right to free expression. They are hammering away at climate science dogmatism in Germany, […] 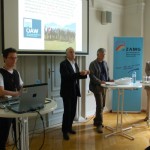 Share this… Facebook Twitter Prof. Hans von Storch’s site Klimazwiebel here brings our attention to a new site called Information portal climate change posted by the Austrian ZAMG – Austria’s Central Bureau for Meteorology and Geophysics. Normally Klimazwiebel posts in English, but because, I suppose, the links and related literature are in German, Prof. von Storch posted this one in German. The new […]

Share this… Facebook Twitter Only 8 days to go! A new paper published today in Atmospheric Chemistry and Physics suggests that the relationship proposed by Henrik Svensmark is supported. Svensmark proposes that changes in the sun’s magnetic field modulate the density of Galactic Cosmic Rays (GCRs) which in turn seed cloud formation on Earth, which changes […]

Happy Thanksgiving! The Pilgrims Adapted (And Avoided The Folly Of Mitigation)

Share this… Facebook TwitterAs an American citizen living in Germany, today is just another regular work day here, but of course I still celebrate Thanksgiving, and do so by having a lavish turkey dinner on Friday evening with friends and family. For the non-Americans who visit this site,  here’s a short version of how Thanksgiving started and […]

Share this… Facebook TwitterThe winter has even overwhelmed winter-hardened Sweden. So much so that the military has been called out to assist. Temperatures as low as -36 degrees Celsius have been recorded in Sweden as snowfalls and storm winds play havoc with transport services. Transport agency calls for caution after snow (23 Nov 10) Sweden […]