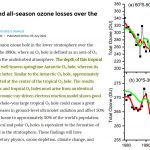 Share this… Facebook TwitterThe increasing loss of ozone (O3) from 3o°N – 30°S has steadily accelerated since the early 1980s despite the 1987 Montreal Protocol’s ban on so-called “ozone depleting substances” like chlorofluorocarbons (CFCs). Once again this suggests human activity does not drive ozone losses. Twenty years after the Montreal Protocol agreement limiting or banning […] 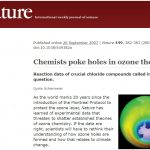 Share this… Facebook TwitterOzone Measurement Error   ‘Shatters’ Established Theory It was 10 years ago this month that scientists revealed an order-of-magnitude-sized error in molecular chemistry measurement that threatened to severely undermine the commonly accepted explanation for  how ozone depletion occurs. The iconoclastic discovery fomented “much debate and uncertainty in the ozone research community.”    The mechanism […]