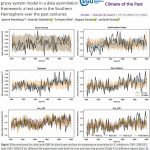 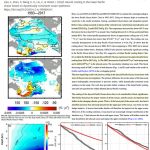 Share this…FacebookTwitterThe Pacific Ocean is 5 to 6 km deep. New research indicates the bottom half (2 km to the bottom) of the Pacific has been robustly cooling since 1993.  A new preprint details the “surprising” Pacific cooling pattern from two ocean heat content (OHC) datasets over the 1993-2017 period. Most OHC records only extend […] 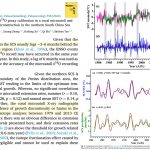 Share this…FacebookTwitterYet another new study documents the lack of regional cooperation with the “global” warming narrative. Since 1979 there has been no net warming in the South China Sea and no evidence of a hiatus or “growth discontinuity” in this region’s coral development (Tan et al., 2022). Natural ENSO variation leads changes in the sea […] 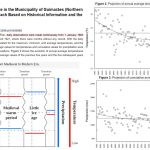 Share this…FacebookTwitterNew studies identify sites in Portugal, southern Africa, and Arctic Svalbard that have not warmed in the last few centuries. Daily temperature records in northern Portugal indicate no net warming from 1863-2004 (Nunes, 2022). Also, the Medieval Warm Period was warmer than the 21st century at this location. Image Source: Nunes, 2022 Affirming this […] 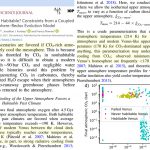 Share this…FacebookTwitterEarly Venus is suggested to have been much colder – and thus habitable – due to higher concentrations of CO2…because CO2 drives cooling in most of the Venus atmosphere (stratosphere, mesosphere, thermosphere). Scientists have for decades agreed it is “well recognized” that CO2 molecules radiatively cool the atmospheres of planets like Earth, Mars, and […] 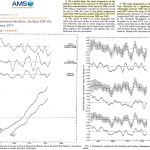 Share this…FacebookTwitterBack in the days when data manipulation was still strictly forbidden, scientists reported the globe cooled significantly for decades even as CO₂ concentrations increased. The global cooling amplitude was -0.5°C from 1960-1965, and 1976 was reported to be the coldest year of any year measured since 1958 (Angell and Korshover, 1978). Image Source: Angell […] 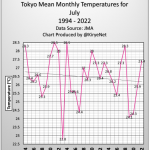 Tokyo Midsummer Hasn’t Warmed In Decades. And: The Missing Hurricanes”.

Share this…FacebookTwitterCharts by Kirye Continuously increasing CO2 emissions into the atmosphere from the burning of fossil fuels is supposed to be causing warming all over the globe right now, so we should be seeing it in most of the trends. But often we don’t. The globe, in fact, has cooled somewhat since the El Nino […] 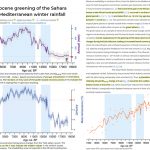 The Sahara Is Green When Warm, Desert When Cold…And It’s Drier Now Than The Last Glacial Maximum

Share this…FacebookTwitterIf wetter is warmer and drier is colder, the modern Saharan climate suggests we are not in a warm period. It is common knowledge that warmer temperatures are associated with wetter, greener climates, and cooler temperatures are linked to droughts, browning, crop failures, etc. For example, in the continental US there is a “robust […] 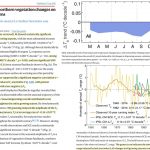 Share this…FacebookTwitterCO2-induced greening may reduce land surface temperatures by -0.7°C over the next 80 years. Earlier this year we highlighted a new study indicating the rising greening trends in the last four decades can be attributed to the change in precipitation patterns and “the physiological impact of rising CO2.” Greening-induced increases in evapotranspiration lead, in turn, […] 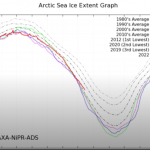 Share this…FacebookTwitterThe globe hasn’t been warming and the Arctic hasn’t been melting much for almost a decade now. Recall the climate crisis loonies warned us some 20 years ago the Arctic sea ice would disappear by the summer of 2014. Well it’s still very much there, as Joe Bastardi reminds us at his most recent […] 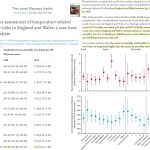 Cold Kills: Since 2000 There Were 85 Times More UK Excess Deaths Attributable To Cold Than Heat

Share this…FacebookTwitterA new Lancet study ominously reports that from 2000 to 2019 in England and Wales there were an average of 791 heat-related excess deaths and 60,753 cold-related excess deaths each year. That’s an excess death ratio of about 85 to 1 for cold temperatures. Adjusted as deaths per 100,000 person-years, the annual ratio is […] 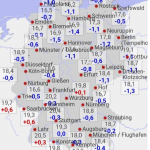 Germany 2022 Summer ‘Heat Wave’? So Far July Has Been Cooler Than Long-Term Mean

Share this…FacebookTwitterThe media and climate activists have been shouting about the hot weather in Europe – as if it has reached historic dimensions. They’ve been using wild fantasy 10-day model projections to intensify the sense of alarm. The whole act of course is to try to get people to think we’re in crisis and, like […]