Share this… Facebook TwitterSince the “dramatic monster killer” tornadoes left a trail “of death and destruction” in the USA, the German media have once again began to blame abnormal human behaviour and SUV-witchcraft for the “man-made” disasters. One example is here at the German leftist Rote Fahne News site. News is what they call it – […]

Share this… Facebook TwitterSteffen Hentrich here of the Liberal Institute, a think tank of the Friedrich-Naumann-Foundation for Freedom brings our attention here to a PNAS paper written by Glen P. Peters, Jan C. Minx, Christopher L. Weber and Ottmar Edenhofer titled: Growth in emission transfers via international trade from 1990 to 2008. Though not saying it directly, the paper calls current climate policy […]

Share this… Facebook TwitterI got the following as a reader comment. It’s a statement that appears to be direct from Janez Potočnik’s office. He is a European Commissioner for Environment and he refutes the story that they plan to mandate water saving measures in Europe.  That’s a relief – saved from another stupid idea, at […]

Share this… Facebook Twitter Parts of southern Europe are experiencing drought conditions. So what does the European Union want to do about it? They want the wet European countries to use less water too. Okay, it’s not a solution, but I guess it’s a way of showing solidarity with dry countries, or something. Call it […]

Share this… Facebook TwitterThe warmist German klimaretter.info site has a piece about sequestraton of carbon dioxide, which reports that Swedish power company Vattenfalls plans have a CCS plant near Berlin ready by 2015. The plant would remove CO2 from Vattenfall’s brown coal power plant and pump it into the earth for high-pressure underground storage. But an expert geological […]

Share this… Facebook TwitterUpdated 4/25/2011, 16:53 CETMSNBC, surprisingly, reports here on the very dark side of Earth Day co-founder Ira Einhorn. Let us recall that the first Earth Day took place on April 22, 1970 (April 22 happens to be the birthday of Vladimir Lenin). MSNBC starts with (emphasis added): Ira Einhorn was on stage […]

Share this… Facebook TwitterBy Ed Caryl There have been multiple studies of solar influence on global and regional temperature changes. Just of few of them are here, here, here, and here. This author made a contribution to the question here. Many of these studies show a some correlation of the sun’s output versus temperature, but […]

Share this… Facebook TwitterBy Ed Caryl Pierre and I have both written about the effects of soot on Arctic and sub-Arctic ice and glaciers, read here Glaciers – The Dark Side and Half Of Arctic Warming Caused By Soot. Scientists are recognising that CO2 is becoming less of a factor and that black carbon soot instead is […]

The Debate On Mercury Emission Standards

Share this… Facebook TwitterNo, I’m not becoming a warmist or a tree-hugger. But I am pleased to give environmentally concerned citizens the microphone here. The following is from Scott Portman of Atlanta, who politely asked to have his essay published here. It’s about the EPA and regulating mercury. I’m in favour of reducing mercury emissions, […] 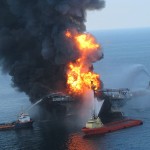 Share this… Facebook TwitterIt was supposed to be USA’s Fukushima – an environmental disaster of Biblical dimensions – one that would serve as a watershed in USA’s energy policy development. The nation would now finally start to wean itself off oil and switch to renewables in earnest. When the BP Deepwater Horizon drilling platform exploded, killing 11 workers, […]

Share this… Facebook TwitterSteffen Hentrich at the  “Thinking For Freedom”, blog of the (Classic) Liberal Institute Friedrich Naumann Foundation For Freedom brings our attention to this Youtube Video by Ronald Bailey (Reason Magazine) und Julian Morris (International Policy Network) which features the Top 5 Environmental Disasters That Never Happened. Enviro-leftists have a talent for concocting scare […]

Global Warming On Pluto Caused By The Sun (Even 3 Billion Miles Away!)

Share this… Facebook TwitterThe online Financial Times Deutschland reports that a British team of astronomers, led by Jane Greaves of the University of St. Andrews in Scotland, have found strong evidence of global warming of Pluto’s atmosphere using the 15-meter James Clerk Maxwell Telescope in Hawaii. They also detected carbon monoxide in its atmosphere. The researchers […]