It was supposed to be USA’s Fukushima – an environmental disaster of Biblical dimensions – one that would serve as a watershed in USA’s energy policy development. The nation would now finally start to wean itself off oil and switch to renewables in earnest. When the BP Deepwater Horizon drilling platform exploded, killing 11 workers, and began releasing million of gallons of crude oil into the Gulf of Mexico, outrage spread across the USA and soon worldwide. 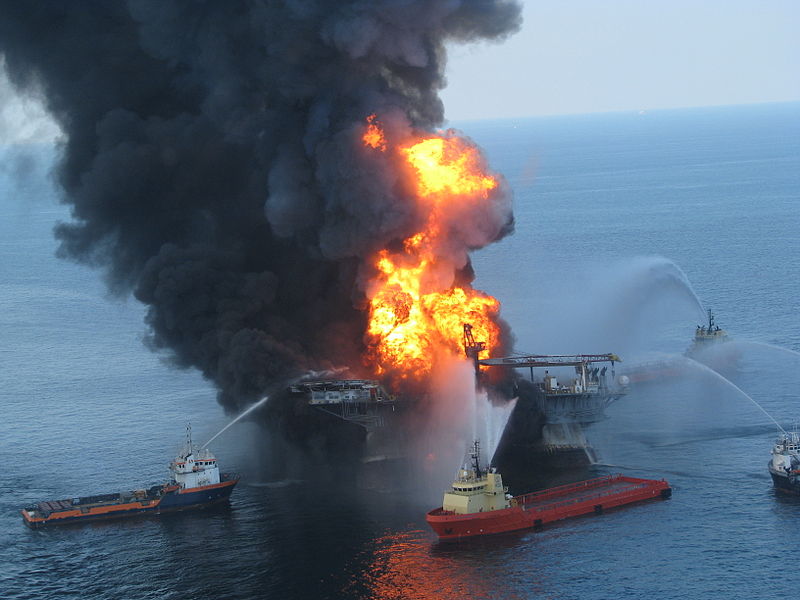 Thanks to brave men (and nature) there is little trace of the Deepwater Horizon tragedy today. Thanks to the workers who risked life and limb in doing their jobs honourably. They will not be forgotten. (Photo credit: US Coast Guard)

Like Angela Merkel declaring a moratorium on nuclear energy in Germany after Fukushima, President Barack Obama also declared a moratorium on offshore oil drilling. Indeed it looked as if Deepwater Horizon was the environmental disaster that environmentalists had been waiting for. Environmental horror stories spread like wildfire. Calls to get away from oil grew shrill.

But fortunately for the environment (and unfortunately for the environmentalists) the Deepwater Horizon disaster turned out to be all hype. Today, just a year later, it is difficult to find any of the spilled oil. Within just a few months the true scale of the spill became known, read here, for example. When compared to the shear volume of the Gulf of Mexico, the 800 million liters of spilled oil turn out to be comparable to a few drops of oil in an Olympic swimming pool. Indeed concentrations of greasy, yukky sunscreen lotion in a public pool are much higher.

Now scientists have discovered that bacteria (nature) are devouring the crude. It’s almost all gone.

The German online FOCUS magazine has written the epitiaph on the gravestone of the “Deepwater Horizon Disaster”, which actually died at birth. Focus writes:

Even the optimists among the biologists were surprised at the speed at which microbes in the water gobbled up the oil in the water.

‘We  misjudged the Gulf ecology’s capability and bacterial ability to process hydrocarbons’, emphasized William Reilly, a leader of the investigation commission that analyzed the oil disaster for US President Barack Obama’s government.”

FOCUS reminds us that “oil spills” are also a natural ongoing phenomena.

160 million litres of oil leak out each year from hundreds of natural fissures in the ocean sea floor. It’s residence time according to studies is anywhere between 10 hours and 5 days. The microbes work so effectively that only a fraction of the oil reaches the sea surface. Obviously crude oil-eating bacteria got along amazingly fine with the oil from Deepwater Horizon.”

Today the stuff is gone, eaten by nature. People are bathing at the beach, and life goes on.

Let’s recall that tens of thousands of underwater volcanoes globally spew out all sorts of nasty things into the oceans. One quickly realises that Mother Nature is in fact a long way from being clean and gentle. When you get down to it, Mother Nature is a cocktail of physical, biological, and chemical weapons – she is always trying to kill us. She is not this silly paradise of a picture that Google uses for Earth Day.

Happy animals living in a tropical paradise with no disease or danger. This is what the planet would be like if we switched off all the lights.

21 responses to “Where’s The Oil! Deepwater Horizon One Year Later”