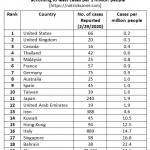 US Leads In Preventing Spread Of COVID-19 …Europe, Other Continents Faring Far Worse!

Share this… Facebook TwitterLately we’ve been hearing lots from desperate politicians suggesting that the US response to the spread of the COVID-19 virus has not been adequate. Far worse in Europe Here in Europe we’ve been hearing a lot about new cases arising on a daily basis, and when I compare the number of U.S.cases […] 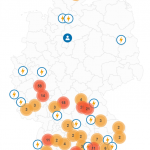 Share this… Facebook TwitterGerman t-online.de news portal here reports how yesterday large areas of central and southern Germany saw the power fail yesterday due to “snow and storms.”   Power outages, Germany, February 27, 2020. (Source: stromausfall.org) In some locations the power was out for hours, t-online.de reports. Of course snow itself has little to […] 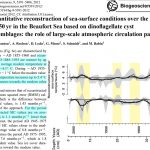 Share this… Facebook TwitterThe perspective that polar bears  are endangered by global warming because reduced sea ice limits their seal-hunting opportunities is contradicted by observations of (a) polar bears thriving (body condition) during melt season, and (b) no trends in reduced seal consumption by polar bears in the 21st century. From the 1880s to 1940s, […] 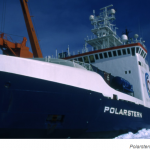 Share this… Facebook TwitterLately we’ve been hearing reports of how Arctic sea ice has (unexpectedly) reached normal levels this winter. This is a bit of good news which the media avoid mentioning. But the resurgence of Arctic ice has hardly been good news for global warming alarmists, and especially for the 300 crew members of […]

Number Of Studies Show Glaciers Internationally Were Smaller In Recent Past Than Today!

Share this… Facebook TwitterFormer Iceland Prime Minister fed up with climate tourism: Glaciers used to be smaller than today By Die kalte Sonne [German text translated by P. Gosselin] Many glaciers are currently shrinking, as they have always done in the past when the climate warmed up. What’s the news on the glacier front? In […]

Share this… Facebook TwitterFrom 2008 to 2016 a widespread cooling ranging from 0.6°C to more than 2.0°C has chilled effectively the entire oceanic region from E. Canada to N. Iceland to S. Europe. The cooling persists year-round and extends from the surface down to depths of 800 m. Image Source: Bryden et al., 2020 A […]

Share this… Facebook TwitterGermans, like lots of other people, often love to preach water but drink wine. So often I’ve heard Germans claim it’s so important to cut back on CO2 emissions, install green energy production system and to live green in order to present climate change. And even though tiny Germany cutting back on […]

Posted in Activism, Alarmism, Lifestyles of the Rich and Alarmist | 8 Responses

Share this… Facebook TwitterThe German government recently decided to exit from coal generated power by 2038, and now one expert says that the exit is going to cost handsomely, and bring zero result. Still, that 2038 target is too slow for some. That’s how German politicians make decisions on things that concern the economy and […]

Share this… Facebook TwitterExperts: polar bears and winter snow on the increase The online Japanese Independent Web Journal (IWJ) reports on a leading figure in polar bear research, Dr. Susan Crockford, who says “polar bears will not become extinct due to climate change” and that “in fact, polar bears have increased rather than become extinct!” […]

Share this… Facebook TwitterAn observational study analyzing the effects of 300, 480, 3200, 7500, and 16,900 ppm CO2 on atmospheric (and soil) temperatures has determined “temperatures of atmospheric air in mesocosms [controlled outdoor experiments] with substantially higher CO2 concentration (ranging from 3200 ppm to 16900 ppm) were lower than that with the lower CO2 concentration […] 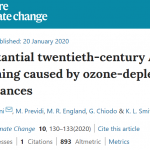 Share this… Facebook TwitterArctic Surprise By Professor Fritz Vahrenholt A few days ago, an international research group from the USA, Canada and Switzerland led by Lorenzo Polvani of Columbia University (New York) published a sensational study in Nature climate change, which attributes a large part of the warming of the 20th century to CFCs (“Substantial […]

Share this… Facebook TwitterIn Germany there have been rumors that the alleged Antarctic Seymour Island “all-time Antarctic record high” of 20.75°C set on February 9th is a hoax – originating by the AFP news agency and then spread by The Guardian. The alleged 20.75°C was supposedly logged by Brazilian scientists and was supposedly almost a […]