Share this… Facebook TwitterThe sun in August 2015 and the climatic UV amplifier in the stratosphere By Frank Bosse and Fritz Vahrenholt (Translated/edited by P Gosselin) In August 2015 solar activity was also weak, only 71% of the mean activity that is usual for this month into the cycle. The solar sunspot number (SSN) was […]

Share this… Facebook TwitterNothing puts the spotlight on Europe’s and USA’s foreign policy debacle better than the Syria crisis and the waves of “refugees” pouring into Europe. It is a policy catastrophe that will surely multiply in size over the coming months and years ahead, and especially puts European security a risk. Naturally Europe’s leading […] 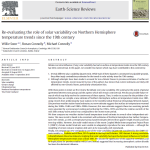 Share this… Facebook TwitterRecently a blogger spouted off about the science of the sun’s role on climate, and so the latest paper on the topic published in Earth-Science Reviews last month is timely. Once again we have a paper, authored by Soon et al, that indicates the sun’s powerful impact on our climate and that CO2 is a minor […]

Share this… Facebook TwitterA couple of readers have brought up the latest on the Solar Impulse 2 project, the solar-powered plane designed by a couple of Europeans to showcase the “unlimited” potential of solar energy in a “solo flight” around the world. Here’s the latest news. The Solar Impulse 2 plane was launched from Abu Dhabi, amid […]

Share this… Facebook TwitterPersonally I find it difficult to believe some people are unable to comprehend the sun’s impact on our climate, especially when something like 99 point-something-percent of the earth’s energy comes from the sun. Even a vegetable notices when a cloud blocks out the sun, when the sun sets, or when it doesn’t get […]

Share this… Facebook TwitterA couple of days ago I posted a comment given by Joe Bastardi on the 20 academics who penned a latter to the Department of Justice calling for an investigation of dissident views on climate science and their supporters. It has since turned out that at least one of these academics is […]

Share this… Facebook TwitterThe news of VW seemingly being caught red-handed rigging emissions tests of its diesel-powered vehicles has hit like a bombshell. The Wolfsburg, Germany based automaker is reeling like never before. The U.S. Department of Justice is launching a criminal probe, and potential penalties of up to $18 billion may be imposed. The criminal […] 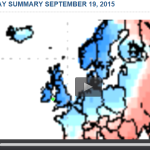 Share this… Facebook TwitterVeteran meteorologist Joe Bastardi has another excellent Saturday Summary up at his Weatherbell Analytics site. At first he makes some philosophical points on why free markets are so crucial and why so many Catholics disagree with the latest Pope on climate change policy. That aside, Joe takes a peek at the upcoming […] 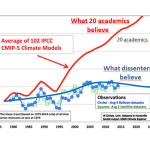 Share this… Facebook TwitterWith 20 academics sending a letter to the US Department of Justice, it’s highly ironic how those who are totally wrong (see chart) are demanding a criminal investigation of those who are correct! Original chart: John Christy, U of Alabama. I asked veteran meteorologist Joe Bastardi of Weatherbell Analytics to comment on […]

Share this… Facebook TwitterAt Facebook Jean-Francois Garlépy, a Duke University researcher, expresses how he has become fed up with the inner workings of western academia and is resigning. Hat-tip: reader Magnum. He writes: This week, I resigned from my position at Duke University with no intent to solicit employment in state-funded academic research positions in any foreseeable […]

Share this… Facebook TwitterTwo days ago David Dilley wrote about the widespread suppression of alternative scientific views on climate change at the academic level, even though these skeptical views are far more in line with observations than the climate model projections. Today he comments on the apparent suppression of science at the American Meteorological Association […]