With 20 academics sending a letter to the US Department of Justice, it’s highly ironic how those who are totally wrong (see chart) are demanding a criminal investigation of those who are correct! 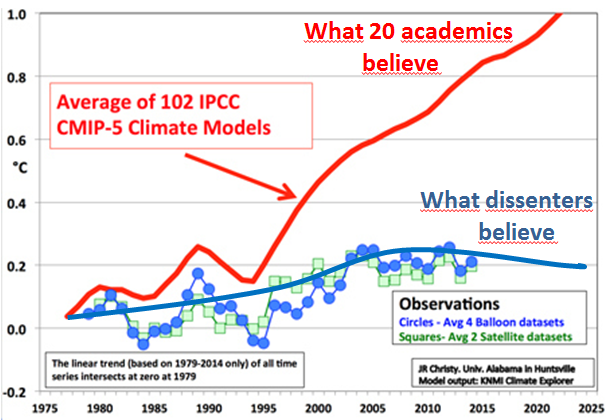 I asked veteran meteorologist Joe Bastardi of Weatherbell Analytics to comment on the news of these seemingly fanatic academics demanding the US federal government step in and suppress scientific dissent. Here’s what he sent.

The people that have penned this despotic missive, which sad to say, has a chance to carry weight, should identify directly who this is targeted at. Who are the people taking all this money, for I know of no one this applies too?

It reeks of paranoia, creating a shadowy strawman argument, in an attempt to silence dissent. This is siimilar to lawsuits that have tied people up in courts for years, an attempt to intimidate into silence anyone that dares speak up against their position. I noted with great interest that I could find no signee who has to make global forecasts on a daily basis where their livelihood depended on actually BEING RIGHT, where if they are not right they get fired. Not one.

In addition, given the amount of money that has been allocated to the promotion of AGW, it can be easily argued that some of the people pushing that issue would not have a job if it wasn’t for their position. My job actually depends on the accuracy of my forecasts. Climate is a major tool for getting that forecast right, and so my knowledge of past weather events is needed for my success. If I see something I disagree on, given what I know, I speak up. Nothing more, nothing less.

I fail to see how any of these signees can be objective, given all they have to lose if they are indeed proven wrong by nature itself. That they actually would do such a thing speaks volumes as to their character, which is no different than a bully on the playground, except their playground is other peoples lives and their protected towers from which they seek to dictate their agenda.

I find it rich in that one of the signees, Alan Robock, Rutgers University, New Brunswick, NJ, appears to have been to Cuba twice to yuck it up with Fidel Castro, a master at silencing those who dare dissent to his ideas. Maybe that is where he is getting his ideas, from the man who claimed in 1963 the US forced hurricane Flora to stall over his island in an attempt to wipe him out.”