Share this… Facebook TwitterAnother green pipe dream, electric cars, bites the dust. A Reva i/G-Wiz charging in London. Photo source: Wikipedia – file from the Wikimedia Commons,flickr.com, frankh (Flickr User) CO2 Handel reports that Toyota, one of the leading hybrid car manufacturers, sees no future for the purely electric car. There is still no business model that […]

Share this… Facebook TwitterAnd that in Europe, no less! Veteran journalist Ulli Kulke (DIE WELT) has a finger on the pulse of the climate issue in Europe. In his latest blog piece here, he tells us that the latest readings are barely detectable. Public’s concern on end-of-world claims is worn out.  (Flood on Java (c.1865-1876) by […]

Coal Makes A Comeback In Europe – CO2 Not So Bad After All!

Share this… Facebook TwitterI’m short on time this week, but Benny Peiser brings our attention to the latest energy revolution: coal! I guess CO2 can’t be that great of a problem after all. At the Christian Science Monitor: While regulation limits coal power in the US, Hunt writes that the energy source is on the […] 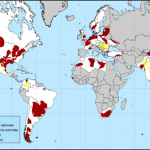 Share this… Facebook TwitterYesterday I wrote here how Europe, particularly Germany, is driving out industry with sky-high energy prices. Will Europe deny its citizens a huge reserve of shale gas energy wealth? Looks that way. (Chart source: http://www.eia.gov/) What follows is what sensible energy policy looks like. Reader Mick J. left a comment on shale […]

Share this… Facebook TwitterAnyone who has ever visited the island of Crete will tell you that it’s beauty simply cannot be expressed with words. That may soon change, tragically. The following video shows what Europe intends to do with this natural treasure: turn it into an industrial eyesore. Warning: may agitate you totally! Crete Plug […]

Share this… Facebook TwitterThose who have been monitoring the environmental movement in Germany over the years know that it is driven by an elitist, authoritarian and intolerant class of people who at times don’t refrain showing their contempt for democracy. Now Manfred Güllner, the founder and director of one of Germany’s leading pollsters, the Forsa […]

Share this… Facebook TwitterChristopher Booker provides a sobering analysis of how NOT to manage national energy policy. Must read! Hat-tip mwhite. Drugged up on green fantasies, duped by activist scientists, and arrogantly dismissing warnings, Angela Merkel and her CDU party lead the country to the brink of an energy disaster. (Photo credit:Ralf Roletschek) Booker writes: In fact, a […]

Share this… Facebook TwitterEurope, and especially authoritarian Germany, has passed numerous measures over the years to get people to change their behavior – all to protect the climate. But the efforts are failing says a new Enquete Commission report to be issued Monday by the German Federal Parliament, and so its authors are now calling for more radical measures […] 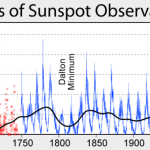 Share this… Facebook TwitterWe’ve been hearing a lot of bogus “model science” asking us to believe the preposterous notion that a warm Arctic and reduced sea ice there “could” lead to bitter cold winters across Europe and North America. In summary the new science insists warming leads to more cold. Now there’s a new paper […]

Share this… Facebook TwitterMichael Krüger at Readers Edition writes about sea level data from the NOAA. NOAA INTERACTIVE SEA LEVEL CHART – CLICK HERE “We have to get used to the idea of a sea level rise of about one meter for this century,“ announced Prof. John Schellnhuber in 2008, based on new findings. Other […]