Share this… Facebook TwitterEconomics editor Daniel Wetzel at Germany’s center-right national daily Die Welt here writes that the Brexit may be the end of the Paris climate treaty and that it is a climate-political nightmare for the EU. Already, he notes, the price of CO2 emissions certificates has plummeted to near low-grade levels, see chart at […]

Share this… Facebook TwitterThe daily Berliner Kurier here writes today that solar physicists at the ultra-warmist Potsdam Institute for Climate Impact Research (PIK) are warning that Europe may be facing “a mini ice age” due to a possible protracted solar minimum. Solar activity has been much lower than predicted earlier. Credit: D. Hathaway/NASA/MSFC The Berliner Kurier writes: […]

Share this… Facebook TwitterGermany’s DWD national weather service in Offenbach has released data and results for the month of June 2016 in its latest press release. Germany and much of Europe have seen plenty of rain in June – all flying in the face of earlier computer models that warned climate change would lead to scorchingly […] 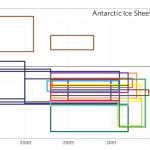 Share this… Facebook TwitterMore “consensus” science: Antarctica not influenced by AGW By Kenneth Richard In recent years, the headlines of common news sources have austerely warned that West Antarctica is melting rapidly: “‘Nothing can stop retreat’ of West Antarctic glaciers” — BBC “The melting of Antarctica was already really bad. It just got worse.”   — […]

“Red Blood On Green Hands”: Germany’s ‘Energiewende’ Turns Into a Wrecking Ball …”The Rescue That Isn’t”

Share this… Facebook TwitterDr. Sebastian Lüning and Prof. Fritz Vahrenholt look at recent news articles on the Energiewende (transition to green energies) in the German mainstream media. Finding: the Energiewende has turned into a folly and the media are waking up. Due to a shortage of time, I will present the main points of the […]

Share this… Facebook TwitterGermany’s Geomar Research Center recently published a press release (see below) concerning the latest on the Gulf Stream. Hat-tip: DkS. Some leading scientists have claimed that melting Greenland glaciers due to “man-made global warming” will lead to a disruption of the Gulf Stream and cause the North Atlantic region’s climate to change […]

Share this… Facebook TwitterOnce welcome as a clean alternative for producing energy, wind turbines in Germany are today faced with ever more hostile political and social environments. As the turbines increase in size, so do their impacts on people and ecosystems that are near them. In the southern German town of Winterlingen hundreds of people […]

Share this… Facebook TwitterBy Dr. Sebastian Lüning und Professor Fritz Vahrenholt June brings with it sunshine and warmth – Germany can rely on that. The German June mean temperature, however, has hardly changed over the past 85 years, as the official weather data of the German DWD National Weather Service confirm: Figure: June mean temperature […]

Share this… Facebook TwitterGood thing Germany still has reliable sources of energy, such coal and nuclear power, online. Otherwise the citizens would find themselves sitting in the dark and seeing their food spoiling away in fridges and freezers. Turbines over troubled waters. Photo right: Bard More reports are out that Germany’s string of problems surrounding its ambitious installation […]

Share this… Facebook TwitterGerman flagship national daily Die Welt has a commentary by Daniel Wetzel on a new report just released in Berlin by Greenpeace Energy, which outlines what Germany needs to do in order to fulfill the Paris Treaty. “Unrecognizable in just a few years” So profound would be the ramifications of doing what […]

Share this… Facebook Twitter2016 Scientific Consensus: Climate Models Aren’t Working By Kenneth Richard In a 2015 editorial on the dire consequences of human-caused climate change, Marcia McNutt, editor of the journal Science, stated with conviction that “the time for debate has ended.”   It’s the “action” of reducing our CO2 emissions that is now “urgently needed” […]

Share this… Facebook TwitterThe correlation between seismic activity (geothermal flux) as a natural mechanism in the 1979 to 2015 global warming is stronger than the correlation with carbon dioxide during the same period. Hat-tip: Kenneth Richard Viterito, 2016 The Correlation Of Seismic Activity And Recent Global Warming The latest report from the Intergovernmental Panel on Climate Change states […]