Again And Again: Experts And New Findings Show No Link Between European Storm Activity And CO2

Share this… Facebook TwitterDWD: For the past there is no clear evaluation showing change in the strength and intensity of storms over Germany By Dr. Sebastian Lüning and Prof. Fritz Vahrenholt (German text translated/edited by P. Gosselin) This month two major North Sea storms have hit Europe rather severely, and not surprisingly the usual climate ambulance […] 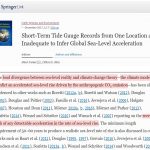 Share this… Facebook TwitterScientists: ‘Loud Divergence Between Sea Level Reality And Climate Change Theory’ Global Sea Level ‘Acceleration’ Just 0.002 mm/year² According to peer-reviewed, “consensus” climate science, anthropogenic CO2 emissions are the cause of Arctic sea ice decline.  In fact, peer-reviewed, “consensus” climate science indicates the causal relationship is so direct and so linear that it can […]

Share this… Facebook TwitterA new working paper here by Dr. Anthonie Bastiaan Ruighaver concludes that climate science has been corrupted by computer models and that it is time to get back to how science is supposed to function. The working paper is titled: “The Power of Falsification, Developing a Greenhouse Gas Theory“. What follows are some […] 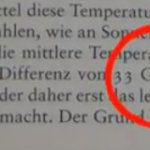 Share this… Facebook TwitterHas Global Cooling Begun? Von Dr. Dietrich E. Koelle (German text translated/edited by P Gosselin) Now that the temperature maximum of the 1000-year cycle has been reached over the past two decades, a new global cooling phase can be expected  — as has been the case over the past 8000 years. Why […] 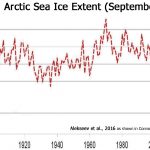 Share this… Facebook TwitterJust a few years ago, no party dared to express doubts over the Energiewende (Germany’s transition to green energies), or to question it for fear of being accused of environmental blasphemy and treason. But as the technical and economic problems of the Energiewende become ever more glaring, people and politicians are now […] 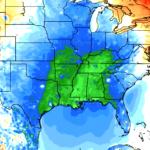 Share this… Facebook TwitterYesterday at Weatherbell Analytics at his Daily Update, meteorologist Joe Bastardi pointed out a topic that particularly fascinated me, and which I think is very important: the urban heat island effect (UHI). Many have been claiming for years that the urban heating has been in part responsible for the higher recorded global […]

Share this… Facebook TwitterA Growing Volume Of Evidence Undercuts ‘Consensus’ Science Update: For a detailed response to the YouTube video criticizing our list, see: Deconstruction Of The Critical YouTube Response To Our 400+ ‘Skeptical’ Papers Compilation   During 2017, 485 scientific papers have been published that cast doubt on the position that anthropogenic CO2 emissions function […]

Share this… Facebook TwitterMichael Limburg of the European Institute for Climate and Energy here reports that Germany will miss its 2020 Greenhouse Gas (GHG) emissions reduction targets by a long shot ,despite the “huge costs” in the form of mandatory feed-in tariffs paid by consumers. The country’s 2050 target of an 80% reduction is looking […]

Share this… Facebook TwitterIf one were to rate the investment made by governments globally aimed at creating concern for a potential problem, then the huge investment in climate change fear by now would definitely have to be rated as “junk” quality. Never has so much seen so little return. Hundreds of billions have been invested so […]

U of Canberra Expert: Doubling Atmospheric CO2 Would Increase “Heating By Less Than 0.01°C”

Share this… Facebook TwitterRecently Kenneth Richard posted a flurry of papers showing that the CO2 climate sensitivity estimate has been trending sharply downward over the years, which means CO2’s claimed effect on warming has been highly exaggerated. Now another opinion has come to light, further supporting the notion that the recent rise in CO2 in […]