The video features PIK researcher Stefan Rahmstorf appearing on German flagship ZDF public television, which claimed “the mean temperature has risen every year since 2000“, and showed Rahmstorf telling ZDF viewers that “the prognoses even say that large parts of Spain and Portugal will be devastated by the year 2100″.

The producer of video took issue with these statements, reminding that mean temperature has “not risen every year since 2000” and that Rahmstorf is in fact falsely selling “his alarmist scenarios” as a forecast (prognosis). The video concludes by characterizing Rahmstorf as a liar by superimposing a Pinocchio nose at the 3:58 mark.

Although the video was viewed only some 1000 times, one of those viewers happened to be Rahmstorf himself, who one week ago was upset enough to comment, and then three days later threatened FMDsTVChannel with a slander lawsuit.

But other skeptics quickly jumped in, scoffing at Rahmstorf’s legal threats and attacked the PIK scientist’s claims. Comments left by Klima Manifest Heiligenroth reminded the alarmist Rahmstorf that in a book he co-authored together with PIK Director Hans-Joachim Schellnhuber, “DER KLIMAWANDEL”, how on page 31, 49 and 37 they themselves unwittingly confirmed there has not been any dangerous global warming in 150 years.

Schellnhuber and Rahmstorf in their DER KLIMAWANDEL book write on page 31 that the mean global temperature is 15°C.

On page 49 Rahmstorf once again repeated the global mean temperature figure of 15°C, and warned it could rise to 20°C by the year 2100:

But on page 37, they present a chart showing that the global temperature is only 14.5°C.: 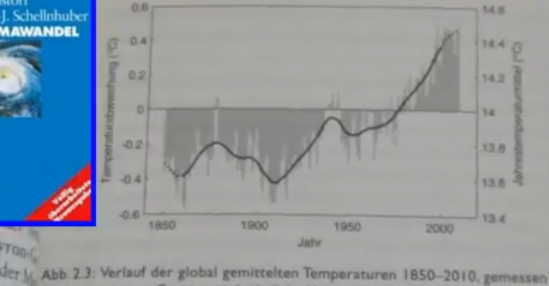 This inconvenient fact was embarrassing to Rahmstorf, and so just a short time after threatening the legal action, the pdf links to pages 31, 37 and 49 mysteriously disappeared.

But thanks to the Wayback Machine, we find pdf files which were secured on July 15, 2016:

When dealing with climate science, the only truths the Potsdam professor finds appear to be the dramatic future scenarios produced by climate models, which he continuously confuses as being accurate 100-year forecasts.