Share this… Facebook TwitterDespite hyped claims, much doubt has emerged over the years on whether or not renewable energies such as wind and sun would able to substitute fossil and nuclear energy. Europe’s PV energy systems are not working out, new study finds. Photo: Prof. Knut Löschke. Source: www.eike-klima-energie.eu/. Getting a sound answer to that […] 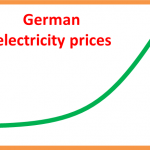 Share this… Facebook TwitterThe online German national daily Die Welt has a piece by business journalist Holger Zschäpitz on Germany’s sky-high, ever climbing electricity prices. Hat-tip: Reader Stefan B. Awhile ago it looked as if prices had finally stabilized. But now Zschäpitz writes that German electricity prices, already among the highest in the world, have jumped […] 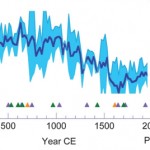 Share this… Facebook TwitterGeologist Dr. Sebastian Luning and chemist Prof. Fritz Vahrenohlt have recently looked at the so-called climate “Tipping Points” hypothesis, one that is heavily promoted by the alarmist Potsdam Institute for Climate Impact Research (PIK). The idea of the climate irreversibly tipping into something completely different and potentially hostile once certain thresholds are reached is […] 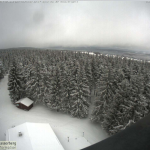 Share this… Facebook TwitterThis morning, even here in the North German lowlands, close to sea level, snow fell as temperatures hovered near the freezing point. Currently many Germans are struggling under snow, ice and cold as winter terminates spring for the time being. The cause: a low pressure centered over the Baltic Sea pumping in […] 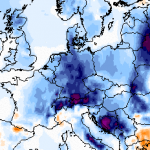 Share this… Facebook TwitterYou gotta wonder what President Obama will be thinking when he visits the northern city of Hanover later today. Ironically the US global warming president may be confronted with snow tomorrow morning as he gets set to pitch further steps with regards to TTIP and global warming to Chancellor Angela Merkel. Temperature […] 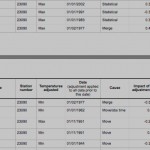 Share this… Facebook TwitterBy Ed Caryl There have been several reports of temperature data fudging by the authorities, the most recent by Paul Homewood on several stations in Paraguay. While exploring long temperature records in Australia, I discovered a particularly egregious example of temperature changing at Adelaide Airport. GISS now offers easy access to their […] 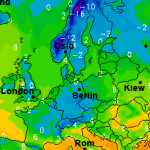 Share this… Facebook TwitterSo far this week where I live here in the North German flatlands people have woken up to surface frost three times already. And although temperatures are forecast to be pleasant today under sunny conditions, the temperature will drop rapidly come weekend. Source: http://www.wetteronline.de/ Joe Bastardi at his Daily Update here says it’s going […] 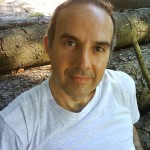 Share this… Facebook TwitterBy Ed Caryl Yesterday, I resumed some temperature analysis I had been doing and found an amazing improvement in the GISS website for station data. Instead of the tiny map with no station locations marked on it, I found a nice rotatable and zoomable globe with dots marking the station locations. There […]