There have been several reports of temperature data fudging by the authorities, the most recent by Paul Homewood on several stations in Paraguay.

While exploring long temperature records in Australia, I discovered a particularly egregious example of temperature changing at Adelaide Airport. GISS now offers easy access to their several sets of data for each station: unadjusted (I assume this is the raw data.), adjusted (I assume this is after TOBs, time of observation, and moving adjustments), adjusted after cleaning (whatever that is), and the final step, after adjustments, cleaning, and homogenization.

Here is the Adelaide Airport record before any adjustments: 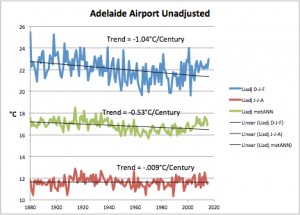 Note in Figure 1 that all the trends are negative, that is, it has been cooling since the turn of the twentieth century, for over the last 100 years, particularly in the summer months. The warmest year was 1914. The warmest summer was in 1880!

Now let us look at the “adjusted” data: 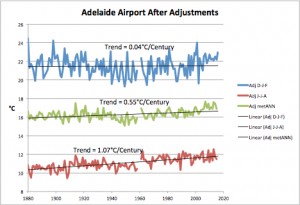 Note that in Figure 2 we see warming, annually, and in all seasons. The warmest year is now 2007, though the warmest summer is still 1880 by a small fraction of degree. But the strange thing about this adjustment is this: 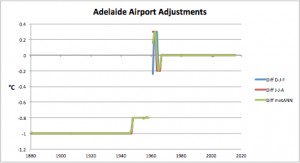 Note that from 1880 to 1947, the adjustment is exactly minus one degree, in all months, all seasons, and all years. It is a blanket, obvious, fudge! Someone got lazy. Instead of attempting to figure out an actual time of observation or move adjustment, they simply slapped on a minus one degree change, and magically, the cooling trend went away. But they were not finished! There is still homogenization to be performed, the finishing touch! 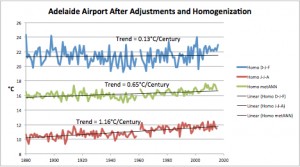 Figure 4: Adelaide Airport after all adjustments and homogenization.

Homogenization now adds another tenth of a degree to the warming temperature trends. How much was the change? 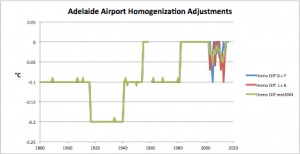 Figure 5: Homogenization adjustment applied to Figure 2 to result in Figure 4.

These changes further cool the past and mostly leave the present unchanged. The changes are the same for all months, season, and years for twenty or more year stretches.

I found the Australian BOM description for their adjustments for Adelaide. They do not resemble the adjustments seen above. They are changes to Tmax and Tmin, are in both positive and negative directions. Changes to Tmax + Tmin sometimes nearly cancel out. (If Tmax is adjusted up and Tmin is adjusted down by the same amount, Tmean will not change.) And the steps are in different years from that above. 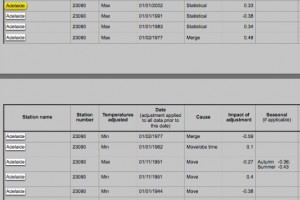 Figure 6: Screen grab from an Australian BOM pdf document found here. Click on the image for a clearer version.

It should be obvious to all that these adjustments to the raw temperature data are an attempt to hide the long-term cooling temperature trend at Adelaide. These changes to the temperature data begs us to examine all station data for similar changes. Is global warming real or just a  product of pencil, pen, and computer?