Share this… Facebook TwitterToday I’m coming out a day early and declaring July 2010 as the slowest melting July since the AMSR-E satellite record has been kept. The once ballyhooed “death spiral” is dead. Reminds me of that line in Tarantino’s cult film Pulp Fiction: “Who’s Zed?” “Zed? Zed is dead.” At the end of […] 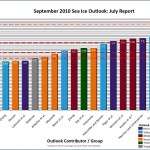 Share this… Facebook TwitterThe July Arctic sea ice outlook for September is out. Click here. Here’s a graphic of the prediction made by 16 different institutes this month, now that they are all 30 days wiser. Now compare this to the projections made 30 days ago, late June. Then again, some are incapable of learning anything. […] 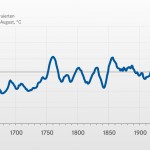 Share this… Facebook TwitterA new temperature reconstruction carried out by a team of German/Russian scientists has yielded interesting results. It finds no correlation over the last 400 years between atmospheric CO2 and the temperature in the Arctic regions studied. Yuri Kononov of the Institute of Geography, Russian Academy of Sciences in Moscow and Michael Friedrich of […]

Share this… Facebook TwitterUpdate 7/30/2010: WUWT debunks this scare: here! Reading the German online daily news this morning, today’s scare-de-jour is the “shocking” reduction of phytoplankton now underway, all due of course to manmade climate change. The “news” is based on a report just published in Nature by scientists Daniel Boyce and Marlon Lewis of the Dalhousie […]

Share this… Facebook TwitterSome of you will recall this pretty face we saw a couple of months ago. We got to know her here, here and here. The IPCC based solar impact on climate on the “consensus of a single astronomer, who agreed with herself”. In March, 2008, Dr. Lean made a presentation on global warming, see the […]

Share this… Facebook TwitterClimate journalism is like being at a third-world bazar where the media behave like merchants all shouting, pitching their catastrophe stories.Die Welt’s recent piece From Proud Jordan River, To A Smelly Trickle (roughly translated) features the crisis of water consumption and the injustice of water’s uneven distribution. Now water needs to be redistributed, along with […]

Posted in Drought and Deserts | 20 Responses

Share this… Facebook TwitterJohn Kerry is a co-sponsor of the latest Cap & Trade bill, which thank God has been put off indefinitely. The bill, should it become law, God forbid, would force all working Americans to pay more for energy and to live more humbly. But living humbly and paying more taxes to the government applies […]

Posted in Lifestyles of the Rich and Alarmist | 4 Responses

Share this… Facebook TwitterPia Heinemann reports in Die Welt today, Ocean Acidification Does Not Lead To Species Die-Off, on a new study appearing in the latest edition of Science. The study contradicts the assumption that ocean acidification leads to species die-off, surprising scientists.Abstract in Science here Manmade emissions of CO2 are thought to be partly absorbed by […]

Share this… Facebook Twitter19 dead and up to 400 injured, many seriously.These are the latest gruesome numbers from yesterday’s Duisburg Love Parade, crowd-control disaster. It’s a classic case of what can go wrong when warnings are ignored or played down. City officials were warned that the location was seriously inadequate, but nobody wanted to be a party-pooper. […]

Share this… Facebook TwitterHow is it that a settled science keeps finding things never expected? For example, the HIAPER Pole-to-Pole Observations (HIPPO) mission was launched in January 2009 and will make a series of five flights over three years covering more than 24,000 miles to sample the atmosphere in some of the most inaccessible regions […]

Posted in CO2 and GHG | 5 Responses