A new temperature reconstruction carried out by a team of German/Russian scientists has yielded interesting results. It finds no correlation over the last 400 years between atmospheric CO2 and the temperature in the Arctic regions studied.

Yuri Kononov of the Institute of Geography, Russian Academy of Sciences in Moscow and Michael Friedrich of the Institute of Botany, University of Hohenheim collect tree samples of Scots pine in the Khibiny Low Mountains of the Kola Peninsula in Arctic Russia

Recall that CO2 concentrations have been rising steadily since the start of the Industrial Revolution, 1870, yet the press release starts with:

Parts of the Arctic have cooled clearly over the past [20th]century, but temperatures have been rising steeply there since 1990.

Rising since 1990? That’s more than 100 years after the start of the Industrial Revolution. The press release continues:

The temperature fluctuated between 10.4°C  and a peak of 14.7°C in 1957 , and then cooled until 1990. The scientists say it correlated very well with solar activity until 1990. Then beginning in 1990, the temperatures started to rise rapidly again. Does anyone see a CO2 correlation there? I don’t.

The only time we have a correlation between CO2 concentrations and temperature is from 1990 until…? Unfortunately the press release does not even mention that.  Until today? 2005? 2000? It really is annoying that they didn’t specify the end of the time scale. If the reconstruction was only up to 2000, then we are only speaking about a 10-year period – a completely meaningless time period. Even 20 years would be highly dubious.

I called UFZ early this afternoon here in Germany to try to find out, but the secretary said that all scientists had already left for the weekend.

UPDATE! The German press release now has the following graphic. The dataset ended 2001! The press spokesman just told me on the phone. So there was warming from 1990 until 2001!  As you see, the graphic iteself is misleading. It almost looks as if the curve goes until 2010. 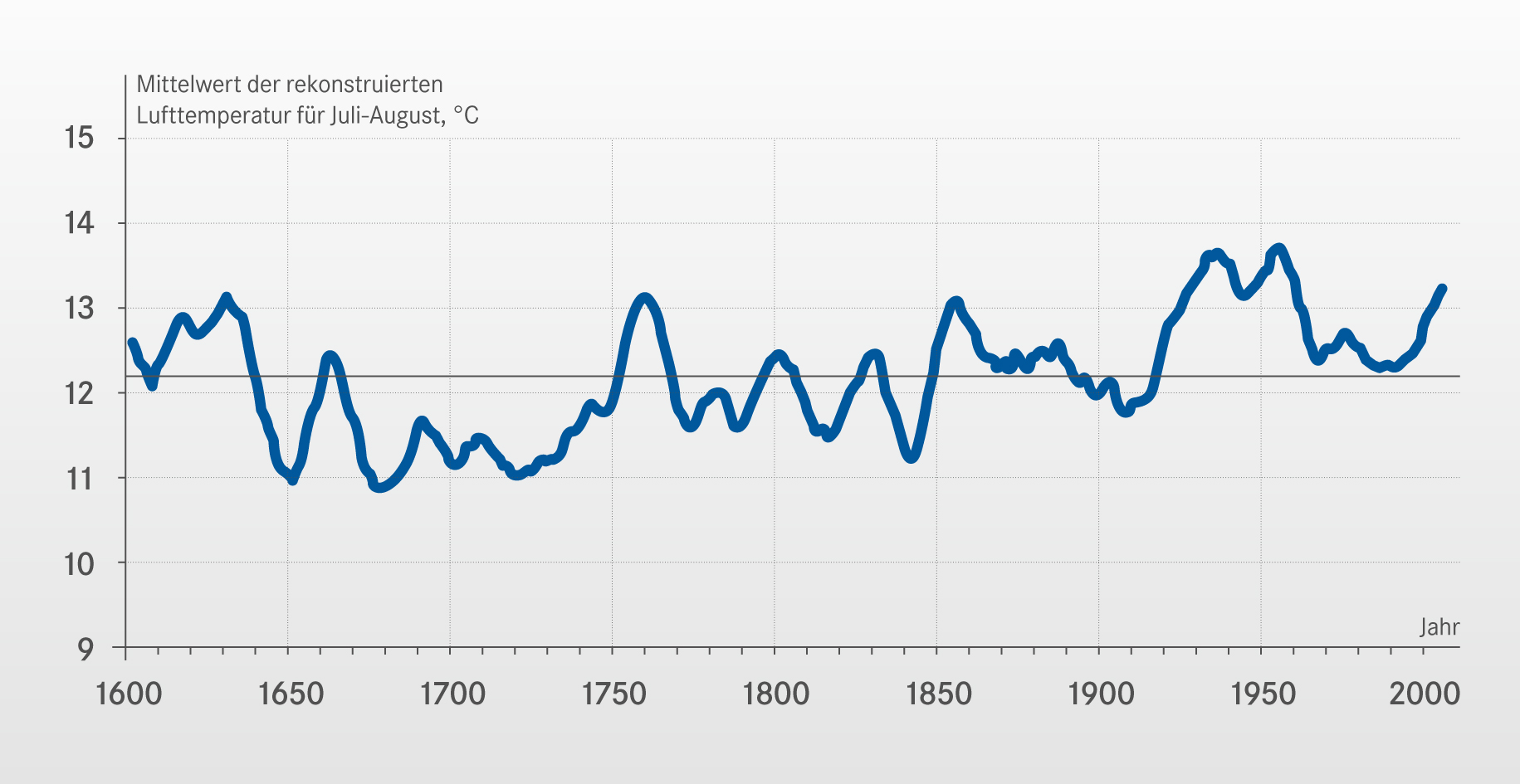 Press spokesman Tilo Arnhold informed by telephone that the dataset goes only up to 2001, yet the press release graphic clearly shows a curve beyond 2001. Graphic Source: Stephan Boehme/UFZ

What stands out in the data from the Kola Peninsula is that the highest temperatures were found in the period around 1935 and 1955, and that by 1990 the curve had fallen to the 1870 level, which corresponds to the start of the Industrial Age.

The team compared their Kola region data to Swedish Lapland and the Yamal and Tamimyr Penninsula temperature reconstructions: Here’s what they found:

Cooling from the middle of the twentieth century until 1990. Cooling!

Concerning Yamal, it is no surprise that it’s out of the ballpark because that dataset was not handled scientifically, see Yamal-gate
(Keith Briffa cherrypicks tree rings to get the temperature reconstruction he wants to see).

So if it’s not CO2, then what could be driving temperature?  The press release goes on:

What is conspicuous about the new data is that the reconstructed minimum temperatures coincide exactly with times of low solar activity. The researchers therefore assume that in the past, solar activity was a significant factor contributing to summer temperature fluctuations in the Arctic.

The only mystery left is why was there was a sudden increase in warming from 1990 until 2001? The scientists believe it has to do with local factors. Clearly it isn’t CO2.