Share this… Facebook TwitterSpring in Germany arriving later and later every year. Also forsythia blossoms in Hamburg arriving later and later By Josef Kowatsch und Stefan Kämpfe [Translated/edited by P Gosselin] This is an addendum to our earlier article on delayed spring blossoms here (and here at NTZ). In our previous article linked above we […]

Share this… Facebook TwitterThe German DWD National Weather Service brings us the statistics for the month of May in Germany. Overall, using the preliminary results from approximately 2000 weather stations, the DWD reports that May in the Central European country was 0.5°C cooler than the 1981-2010 mean and 0.4°C warmer than the 1961-1990 mean. The 1961-1990 […]

Share this… Facebook TwitterGerman financial daily Handelsblatt here reports that a former shipyard which later turned to building offshore wind turbine sub-structures has filed for insolvency. According to the company’s Managing Director Thierry Putters, the filing is due to “a looming inability to pay” its creditors. The Handelsblatt writes that 188 employees will be impacted. They […]

Share this… Facebook TwitterUPDATED 13:52 CET As part of the 35th Vienna Motor Symposium, German online financial daily Handelsblatt here has an interview with leading automotive engine design expert Prof. Fritz Indra, who says that much of the talk about electric vehicles is “hype” and calls the Tesla “a failure”. Indra, 75, is now retired after a […]

Share this… Facebook TwitterThough regional, what follows is a scandal that illustrates just how energy laws and policy are formed today in many developed countries: by green activists and lobbyists who have an extreme agenda or narrow, self-serving interest. German national daily Bild here reports how in Hannover the new energy law for the state of […] 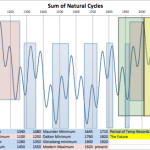 Share this… Facebook TwitterAdditional Thoughts On Natural Cycles  By Ed Caryl In Natural Cycles In A Random World Are Unmistakable…Future Holds Nothing To Fear, we showed plots of simulated temperature generated in Excel using the sum of three cycles and a random number generator. Some commenters realized that if you averaged many runs, like the […]

Share this… Facebook TwitterGood to see that this NTZ site is contributing to articles on climate change and renewable energies by larger media outlets. For example Charles Battig at the American Thinker here cited NoTricksZone in his report on Thomas Friedman’s editorial on the supposed “success” of Germany’s renewable energies. In his editorial, Friedman stupidly ignores all […]

Share this… Facebook TwitterBy Dr. Sebastian Lüning and Prof Fritz Vahrenholt It’s rather peculiar: None of the IPCC climate models projected the warming pause of the last 17 years. An real embarrassment. Scientist Stefan Rahmstorf was devastated, and so publicly disputed that there even was a pause at all. Naturally this strategy cannot be successful over the […]

Share this… Facebook TwitterHere’s another compelling reason why we should all be hoping that the earth will warm and not cool over the coming decades. (After all, there is no way the temperature is going to stay stagnant). The print edition of yesterday’s UK Daily Mail has a short report on an international study on the […]

Germany’s Green Party Apologizes For “Massive Sexual Abuse Of Children”, Advocacy of Pedophilia …”Up To 1000 Victims”!

Spiegel Describes Circus of “Trickery” In Run-Up To Paris. Russia Wants To Curb CO2 Emissions By Increasing Them!

Share this… Facebook TwitterSpiegel journalist Axel Bojanowski has an analysis on the Berlin climate negotiations now taking place among the leaders of 36 nations who have the aim of laying the groundwork for a binding climate treaty in Paris later this year. The title: “They’re tricking; they’re getting creative.” Bojanowski calls it the “big climate show”. […]